Kim Seong-yeon attempts an attack against Saki Niizoe of Japan in the women's middleweight event at the Jakarta Palembang 2018 Asian Games in Jakarta, Indonesia on Aug. 30, 2018. Kim won the silver medal at the event. [JOONGANG ILBO]


Korea will be sending 13 judokas to compete in 14 events at the 2020 Tokyo Olympics.

At the Tokyo Games, Judo has seven weight class events for both men and women as well as an inaugural mixed team event. One country can only enter a single athlete for each weight class.

Korean judokas will compete in all seven women's events and in six men's events — excluding half middleweight — and also in the mixed team event.

The top ranked 18 athletes in each weight class qualify automatically.

For the women, Kang Yu-jeong, No. 17 by Olympic ranking competes in the extra lightweight event, No. 16 Park Da-sol in half lightweight, No. 15 Kim Ji-su in lightweight, Han hee-ju in half middleweight as she was reallocated a remaining berth, Kim Seoung-yeon in middleweight after earning a continental berth, No. 16 Yoon Hyun-ji in half heavyweight and No. 13 Kim Ha-yun in heavyweight.

For the mixed team event, three male judokas and three female judokas will be drawn from the individual competition to make a six-person team. 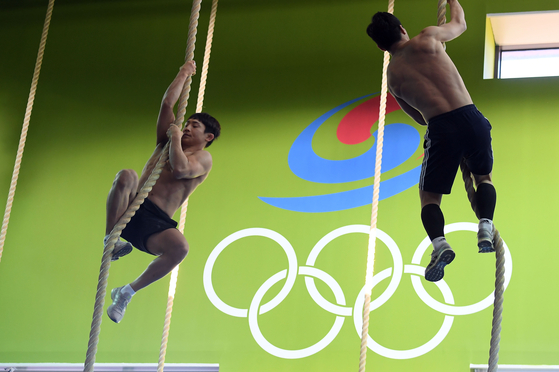 
Japan has the most gold medals in the Olympic judo event, with Korea coming in third with 11 gold medals after France. Korea has the second most silver medals and ties with France in second for total medals.

Of all Summer Games events, Judo has earned Korea the third-most gold medals, after archery and Taekwondo.

Korea first competed at the 1964 Tokyo Summer Games where Judo debuted as an official Olympic sport. Korea's first ever medal came that year with Kim Eui-tae winning bronze in the men's middleweight.

Women judokas started participating at the 1988 Seoul Olympics, but only as a demonstration sport. Women were first awarded medals at the 1992 Barcelona Summer Games where Kim Mi-jung brought home a gold medal in the half heavyweight event.

Thirteen Judokas look to relive this Olympic glory. Team Korea seems set for the big stage, winning three gold medals — Kim Won-jin, An Ba-ul and An chang-rim winning one each — at the 2021 International Judo Federation World Masters in Doha, Qatar in January. 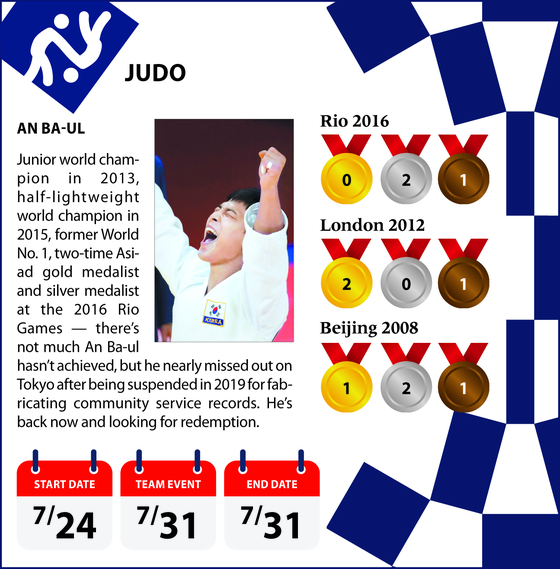 An Ba-ul is set to become a two-time Olympian at the Tokyo Games, as he won the silver medal for the half lightweight event in Rio. Despite being a former judo prodigy and a big name, he nearly missed out on Tokyo after being suspended in 2019 for fabricating community service records. He's back now and looking for redemption.

Judo starts with the women's extra lightweight event on July 24, with the mixed team event starting on July 31. The event ends the same day.