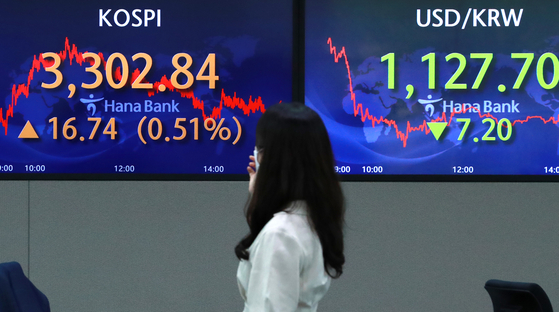 A board at Hana Bank in Seoul on Friday shows the Kospi closing above 3,300 for the first time. The Kospi has hit new hights14 times this year, and five times this month alone. [NEWS1]


The record close was the second this week, coming just one day after the Kospi last set a new record at 3,286.1 on Thursday.

This year has been a good year for the Korean stock market, which started the year by breaking the 3,000 threshold for the first time just seven days into 2021.

Since then, a new all-time high has been set 14 times.

The market has been on an especially bullish run recently, as the record has been broken five times this month alone.

Total market capitalization as of Friday exceeded 2,300 trillion won ($2 billion) as investors have been flooding in despite comments on Thursday from Bank of Korea Gov. Lee Ju-yeol that interest rates are likely to be raised within this year.

Friday’s market was driven mostly by foreign and institutional investors, while retail investors dumped their shares.

A bullish rally from U.S. markets overnight was considered a major contributing factor to the new record in Seoul.

Both the S&P500 and the Nasdaq broke records on Thursday thanks to the Joe Biden administration succeeding in drawing bipartisan support for its infrastructure bill, although the size has been cut from the initial proposal.

“As it was in the U.S., semiconductor, infrastructure and financial shares saw a sharp increase [on Friday],” the analyst said.

Some brokerage firms are projecting the Kopsi to reach 3,500 in the second half.

Lee hinted at the possibility of raising interest rates more than once.

The BOK last year lowered the key interest rate twice to a record-low of 0.5 percent.

The interest rates have remained frozen for more than a year.

Recently rapid inflation and record-breaking household debt have risen as major risks to economic recovery, which the government is targeting at 4 percent for this year, raising the need to rollback the excessive liquidity in the market.

Inflation in the last two consecutive months has risen above the BOK’s target of 2 percent.

In April, inflation rose 2.3 percent, the sharpest on-year increase in more than three and a half years. Last month it rose 2.6 percent.

Not only is the rising consumer price increasing the burden on households, but rising raw material prices due to economic recovery are expected to increase the burden on businesses as well.

Why leaders get shots first (KOR)