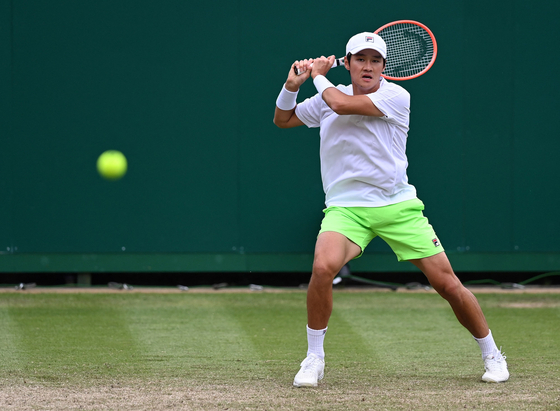 
Korean tennis player Kwon Soon-woo has advanced to the semifinals at the 2021 Eastbourne International in Eastbourne, England, beating world No. 87 Ilya Ivashka in the quarterfinals on Thursday.

Kwon will now go on to face a tough challenge in world No. 18 Alex de Minaur, the No. 2 seed in the tournament, in the semifinals on Friday, scheduled to be played at 11:20 p.m. on Friday night in Korea.

Reaching the semifinals comes as something of a surprise for Kwon, who wasn't actually supposed to be playing. After losing his qualifier to Britain's Alastair Gray over the weekend, Kwon was knocked out of the Eastbourne International.

Kwon is having a good week. On Wednesday the Korea Tennis Association announced that he has qualified for the 2020 Tokyo Olympics.

Korea competed in the tennis competition at the Games from its introduction as a medal event in 1988 to the 2008 Beijing Olympics, when Lee Hyung-taik went out in the first round. Korea failed to qualify at the 2012 London Olympics or 2016 Rio Games.