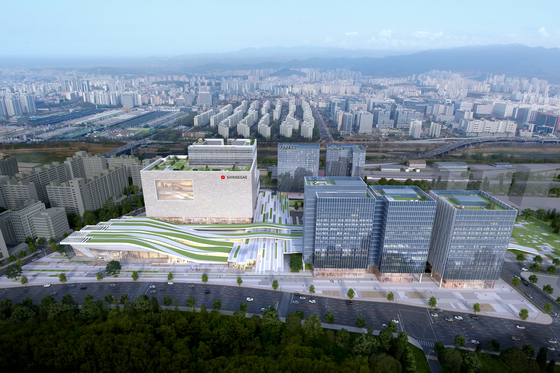 A computer-generated graphic shows what the Suseo Station Transfer Center could look like after construction is complete. [HANWHA E&C]

A consortium led by Hanwha E&C has been selected to carry out a mixed-use development project of Suseo Station Transfer Center in Gangnam, southern Seoul, Hanwha E&C announced on June 25.

The development is worth around 1.2 trillion won ($1 billion).

The Suseo Station development project involves building a multi-purpose commercial hub that encompasses 115,927 square meters (28.6 acres) of land in Gangnam District, southern Seoul. The SRT Suseo Station is a central connecting point not only for public transportation within Seoul, but also for the nationwide high-speed rail network.

What is notable is the partnership between Hanwha E&C and Shinsegae, the frontrunner in the retail industry. Hanwha E&C plans to build an 83,000 square-meter Shinsegae Department Store that will serve as a landmark of the area. It will be one of the three biggest department stores in Seoul, along with the Shinsegae Gangnam Department Store and The Hyundai Seoul.

The connection between public transport will be seamless, precisely designed considering the existing and soon-to-be-built rail lines, Hanwha E&S said. Facilities for business, accommodation, cultural activities, education and medical purpose are also included in the development plan as well.

As the core competence of the project organizer lies in its ability to coordinate and collaborate, Hanwha E&C’s experience and know-how accumulated through past years created a strong synergy effect in cooperation with partner companies, the company said.

“Station area development requires professional know-how not only in construction, but also in designing the multi-purpose complex, stably operating the facility for the next few decades and securing public interest,” an official from Hanwha E&C said. “We aim to be at the top of the list for any future development projects to come.”