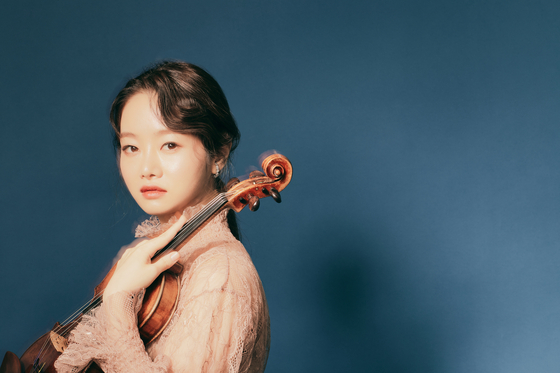 
After signing with Deutsche Grammophon (DG) early this year, Korean violinist Kim Bomsori released her very first album with the label on June 18. She became the third Korean artist to sign an exclusive agreement with DG after pianist Cho Seong-jin and soprano Park Hye-sang.

Upon winning the ARD International Music Competition in 2016, the 31-year-old violinist started touring Europe, until the pandemic started. Instead of taking a rest, Kim recorded her DG debut album.

"Legendary violinists in the 20th Century, such as Kreisler and Heifetz, arranged opera arias or ballet music and played them," Kim said, adding that she recorded the album as if "preserving that tradition."

According to Kim, a friend listened to the album before the release and described the experience similar to watching a thrilling action movie like "The Bourne Identity."

"My friend told me it was impossible to stop the music for even a bathroom break because it was like watching an exciting and thrilling action film that condensed emotional scenes," said Kim. "I was quite happy with the feedback."

The whole experience of recording the album, Kim says, was also as "thrilling as an action film."

The NFM Wroclaw Philharmonic orchestra accompanied the violinist under the baton of Giancarlo Guerrero in the National Forum of Music in Wroclaw, Poland. To travel to Poland from Germany, Kim usually flies. But after finding out international flights were impossible due to the pandemic, Kim and her team drove. Some orchestra members, as well as the conductor and the tone master, tested positive for the coronavirus so that recording Kim's debut album seemed like a "mission impossible."

It kept getting delayed but finally,"like a miracle," Kim recorded the album last December.

For her latest release, the violinist said she wanted to portray what it sounds like to "sing with a violin."

"While I was attending Julliard School in New York, I got to see many operas at the Metropolitan Opera House," she said.

"Watching the opera singers using their bodies like an instrument, it inspired me a lot on how I play my violin. I want to sing with my violin."

Kim said she feels she is so used to her violin that she can use it like her own voice.

"I decided to reflect the voice-like qualities of the violin in the arrangements in the album," said Kim. "I hope that my performance can help listeners picture scenes in the operas and the ballet performances and enjoy a moment of freedom through music."

To promote her album, Kim toured the country with Russian pianist Ilya Rashkovsky on June 22, ending with a concert in Seoul on Saturday.