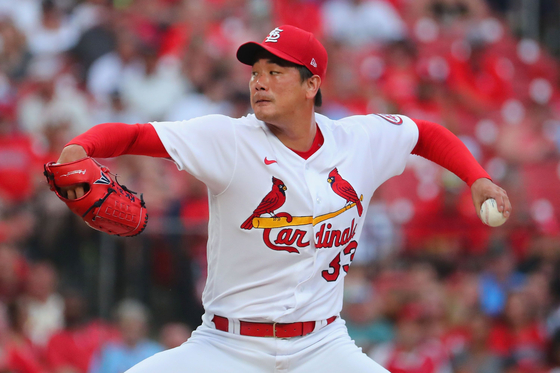 Kim Kwang-hyun of the St. Louis Cardinals delivers a pitch against the Pittsburgh Pirates in the first inning at Busch Stadium in St Louis, Missouri on Friday. [AFP/YONHAP]


Kim Kwang-hyun of the St. Louis Cardinals has now gone 10 straight games without picking up a win after walking away with a no decision against the Pittsburgh Pirates on Friday.

Kim threw four and one third innings, giving up seven hits for four earned runs with one walk and one strikeout. His ERA for the season is now at 3.98, but the monthly figure jumped up in June to 4.67.

Kim had a fairly solid outing with the glaring exception of the third inning, when he allowed four runs to cross the plate.

The combination of a single, a walk and a wild pitch had runners at the corners with one out, allowing another single to drive the Pirates first run in. Another single loaded the bases, with a groundout bringing the next run home.

One more single stopped the bleeding, allowing two more runners to score with a runner getting caught at second to end the top of the inning at 4-1.

The Cardinals responded quickly, giving Kim some of the run support that has been noticeably absent from recent games. By the end of the third the score was 4-3, and the Cards added one more in the fourth so that when Kim left the mound early in the fifth inning the score was tied at 4-4.

Kim walked away with a no decision but the Cardinals took another loss, with a single run scored at the top of the fifth to give the Pirates a 5-4 victory.

Kim hasn't picked up a win since April 23, and carries a 5-1 line as the season nears the halfway point. He spent some time on the injured list earlier in the month but appears to have recovered, although his ERA in June shows a significant drop off compared to previous months. 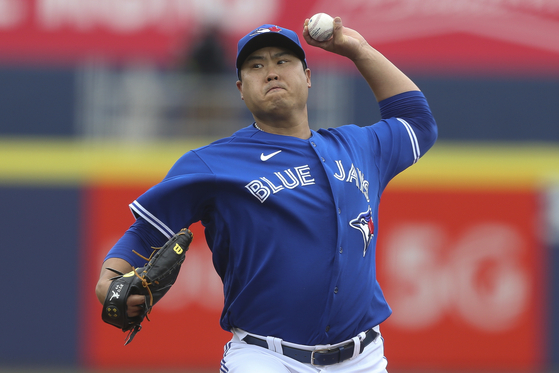 Toronto Blue Jays starting pitcher Ryu Hyun-jin throws a pitch during the first inning of a baseball game against the Baltimore Orioles in Buffalo, New York on Saturday. [AP/YONHAP]


But while Kim took a no decision. Ryu Hyun-jin of the Toronto Blue Jays once again threw up very similar numbers for a very different result on Saturday.

Like Kim, Ryu gave up seven hits with four earned runs against the Baltimore Orioles, or though the veteran southpaw stayed in the game for six and two third innings. Ryu gave up two walks and threw three strikeouts with his ERA now at 3.41.

But while four runs was a no decision for Kim, it was a big 12-4 win for Ryu and the Blue Jays.

Like Kim, Ryu gave up all four runs in a few minutes, allowing four to cross the plate in the seventh after throwing six shutout innings. In Ryu's case, however, the runs were inconsequential — the Blue Jays were already up 12-0 by the end of the sixth.

Ryu now has seven wins and four losses in 15 starts this season.