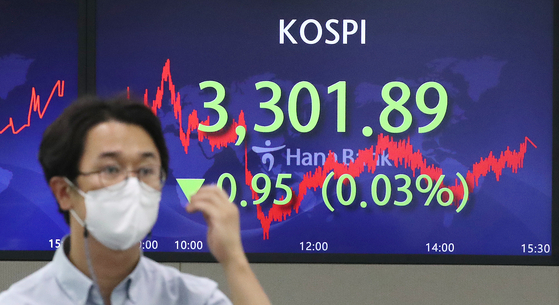 A screen in Hana Bank's trading room in central Seoul shows the Kospi closing at 3,301.89 points on Monday, down 0.95 points, or 0.03 percent, from the previous trading day. [NEWS1]


Stocks closed nearly flat Monday, snapping a four-day winning streak amid increased valuation pressure and virus concerns, after the key stock index closed at an all-time high the previous session. The won fell against the dollar.

After a muted start, the Kospi traded in negative territory, falling through the 3,300-point mark.

Investors took to the sidelines to lock in profit after the stock index finished the previous session at an all-time high on hopes of a massive infrastructure package in the United States.

The local currency closed at 1,130.3 won against the dollar, up 2.6 won from the previous session's close.