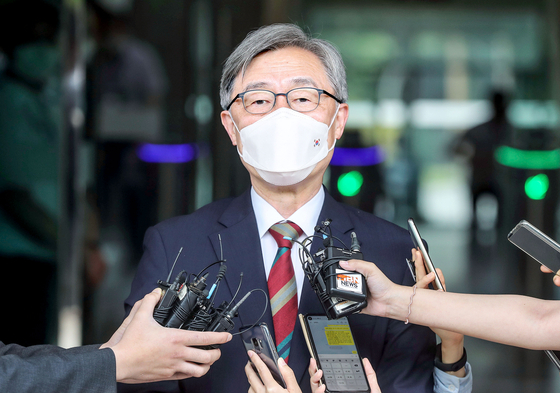 Choe Jae-hyeong, chairman of the Board of Audit and Inspection, tells reporters on Monday that he is stepping down from his post. [KIM SEONG-RYONG]


Choe Jae-hyeong, head of the Board of Audit and Inspection [BAI], tendered his resignation amid speculation that he will run for president.

"I concluded that it is inappropriate for me to continue serving as the chairman of the Board of Audit and Inspection amid growing speculations about my fate," Choe told reporters on his way to the office Monday morning. "I, therefore, expressed my intention to step down to the president."

President Moon Jae-in appointed Choe, a 64-year-old former judge, to head the audit agency in January 2018. "I apologize to the people, Moon and the members of the Board of Audit and Inspection that I could not complete my tenure," Choe said. His four-year tenure ends next year.

"I understand the people's expectations and concerns about me," Choe said. "I will spend time to seriously think about what role I can play for the future of the country after stepping down from the current post."

Asked if he plans to run in the March 2022 presidential election, Choe said, "I will have an opportunity in the future to talk about it."

Although Choe was handpicked by Moon, he has emerged as a possible presidential contender for the opposition. Ever since the BAI announced last year that Moon's administration shut down the Wolsong-1 nuclear reactor earlier than scheduled based on a faulty economic assessment report, the ruling Democratic Party (DP) has attacked Choe and the BAI for undermining the legitimacy of Moon's nuclear phase-out policy.

Choe is the second top official of the Moon administration to resign for a possible presidential run – for the opposition.

The first was former Prosecutor General Yoon Seok-youl, who resigned in March. Yoon, appointed prosecutor general in 2019, stepped down after a protracted struggle with the administration over the president's plans to weaken the state prosecution service and Yoon's investigations into high-profile Moon allies. Yoon is currently the opposition's presidential front-runner.

Moon accepted Choe's resignation around 5:50 p.m., presidential spokeswoman Park Kyung-mee said. Moon expressed regret that Choe was setting an undesirable precedent by leaving office for his political ambitions, even though the four-year tenure of the BAI chairman was established to guarantee the agency's political neutrality, she said.

The ruling DP on Monday launched ferocious attacks at Choe.

"We hoped Choe would complete his tenure for the sake of the BAI's political neutrality and independence, but he made an extremely regretful decision," said Rep. Back Hye-ryun of the DP in an interview with MBC radio.

She said it won't be easy for Choe, who spent his entire career as a judge before heading the BAI, to transform into a politician and successfully run for president.

Rep. Woo Sang-ho said it is unethical for Choe to express his political ambition to become an opposition candidate after serving in a top post in the Moon administration. "I can see that Yoon had a grudge over then-Justice Minister Choo Mi-ae's attempt to suspend him, but why is Choe leaving?" he said. "The people will not forgive him. This is a big mistake."

Former Prime Minister Chung Sye-kyun told BBS radio that the head of the BAI and the prosecutor general are posts that should be independent from politics. "I wonder what people will think about them serving in such posts and then jumping directly into politics," he said.

Main opposition People Power Party (PPP) Chairman Lee Jun-seok on Monday welcomed Choe's resignation. "I have always had a good opinion of him," Lee said. "I believe he is someone who can coexist with us."

Lee said he understands that Choe will spend time alone to think about his political path instead of joining the PPP at once. "Politics is a service to the country, and you need a decision of your own," Lee said. "We didn't push him nor pull him."

Meanwhile, in the latest survey by the PNR research, Yoon came out on top of other presidential possibles, scoring 32.7 percent. In the poll, released Sunday, Gyeonggi Governor Lee Jae-myung was ranked second with 25.5 percent and former DP Chairman Lee Nak-yon third with 13 percent.

Rep. Hong Joon-pyo of the PPP, former presidential candidate of the opposition party defeated by Moon in 2017, was ranked fourth. Former Justice Minister Choo was ranked fifth and Choe was ranked sixth.