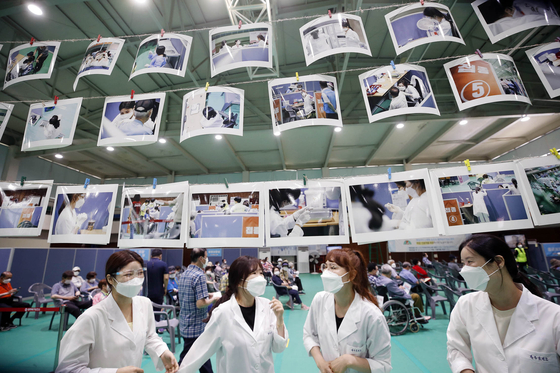 Health workers look at photos hung inside the vaccination center in Gwangju on Monday, after the district office installed a photo exhibition to thank the medical staff for their hard work during the Covid-19 pandemic. [NEWS1]


With the country set to ease virus restrictions this Thursday, the average daily Covid-19 cases in Korea increased on week by more than 10 percent last week — of which, most of the infected were younger people in their 20s.

The weekly average of daily local infections, which is used to determine the country’s social distancing level, rose to 492 last week from June 20 to 26 — up 10.6 percent from 444 a week earlier, the KDCA said.

While the country is seeing a decline in elderly Covid-19 patients due to its aggressive vaccination campaign aimed at seniors, the virus has apparently shifted to the younger age group of those who are in their 20s.

“Last week’s Covid-19 patients were mostly in their 20s,” said Lee Sang-won, head of epidemiological investigation analysis at the Central Disaster and Safety Countermeasure Headquarters, during a briefing on Monday.

In particular, those in their 20s increased by 112 people, or by 21.4 percent, from the previous week.

“After analyzing the infection routes, the virus among those in their 20s and 30s mostly spread between acquaintances and at public facilities such as restaurants and [bars],” Lee explained, while adding that people in their 40s and 50s mostly got infected during religious activities and at workplaces.

Preventing the virus spread from among active young people in their 20s and 30s has become an issue, as the country is set to implement eased social distancing measures later this week — extending operating hours at restaurants and bars and allowing more people at social gatherings.

In addition, Korea has been mainly inoculating the elderly, stressing the importance of seniors registering for vaccine shots as the elderly population has a higher risk for fatality or serious illnesses than that of other age groups.

As a result, the public aged between 18 to 49 have to wait to get vaccines until August at the earliest, but on a first-come, first-served basis. Which vaccine will be administered is yet to be decided.

“We urge you to strictly abide by public health measures such as wearing masks, ventilating areas and immediately getting tested if any symptoms appear until herd immunity is formed through sufficient vaccination,” Lee added.

Originally scheduled to receive the AstraZeneca vaccine, this group has been regrouped for the Pfizer jab after the age limit was imposed on the vaccine due to concerns over rare cases of blood clots.

Reservations will be taken online (https://ncvr.kdca.go.kr) or at local health centers until Wednesday. Inoculations for the first dose will take place from July 5 to 17, and the second shot will be administered from July 26 to Aug. 7. 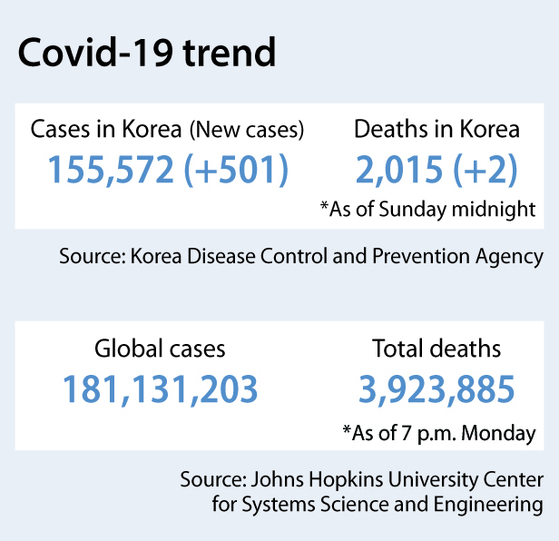 Most social distancing rules will end on Monday