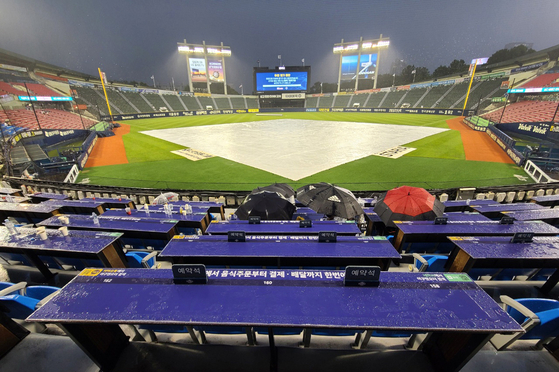 A game between the Doosan Bears and Lotte Giants is stopped due to heavy rain at Jamsil Baseball Stadium in southern Seoul on Sunday. [NEWS1]


The Doosan Bears reported on Monday that a front office employee has tested positive for Covid-19, with all Doosan staff, coaches and players undergoing tests as of press time.

“All Doosan Bears staff and athletes are all taking Covid-19 PCR tests” a Doosan Bears official said Monday. “We will strictly comply with the Covid-19 manual. Results will be out by this evening or tomorrow morning.”

No Doosan players had tested positive as of press time, after undergoing rapid antigen tests at the club’s designated hospital, the Olympic Hospital in Songpa District, southern Seoul.

However, all players must now also take PCR tests in line with health authority guidelines.

Investigations are still underway tracing who the infected person interacted with at the club.

“Even if everyone turns out to have tested negative, some athletes might still have to self-quarantine if the epidemiologist decides that they should,” said a Doosan Bears official.

If any athletes have been in close contact with the infected employee, the Bears will substitute them with players from a special Covid-19 entry list while they quarantine.

The Bears were originally scheduled to leave for Daejeon today between 3 p.m. and 4 p.m. to face the Hanwha Eagles for three games starting Tuesday. The team will now have to seize all engagements until the results of the epidemiological investigation and diagnostic test are out.

“Generally, the KBO league does not stop even when there is a close contact or an infected athlete in the team” a KBO official told reports on Monday. “Instead, we use the special Covid-19 entry.”

As the Bears played the Lotte Giants over the weekend, a Giants official reported that their front office employees will receive diagnostic tests as they may have worked in the same area as the Bears employees.