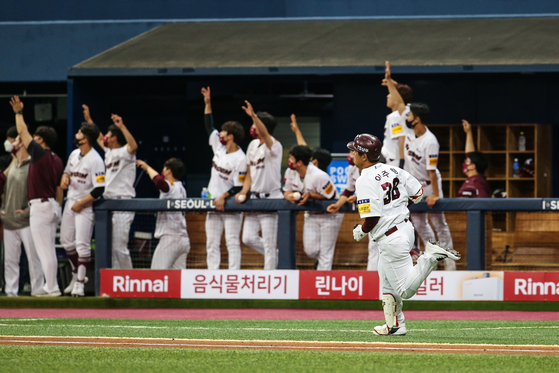 Lee Ju-hyung of the Kiwoom Heroes rounds the bases after scoring the first home run of his career against the Kia Tigers at Gocheok Sky Dome in western Seoul on Sunday. [YONHAP]


The KT Wiz reclaimed a narrow lead at the top of the KBO over the weekend, with competition remaining unusually tight with just three weeks to go before the Olympic break.

The Wiz swept the Hanwha Eagles over the weekend, jumping from third back to first as the LG Twins and Samsung Lions were knocked down to second and third respectively. The Wiz had an easy outing against the 10th-place Eagles, comfortably winning all three games: 2-0, 11-2, 11-1.

KT's return to the top was practically guaranteed as its two closest rivals, LG and Samsung, faced each other over the weekend. The Twins emerged victorious, taking two of the three games for a one-game lead over the Lions.

With a rain cancellation interrupting play on Friday, the two teams played a double header on Saturday — the first game went to LG 10-5 and the second to Samsung 107 — with a rubber match on Sunday won by the Seoul team, 9-5.

The fourth-place SSG Landers and fifth-place NC Dinos also faced off in three incredibly close games over the weekend, with the Dinos ultimately emerging victorious.

The two middle-of-the-table teams' first clash on Friday ended 11-10 to the Dinos, with three last-gasp runs at the bottom of the ninth giving the Changwon team the edge. Saturday's game was even tighter, with neither team able to find an advantage in 12 innings to end the game tied at 10-10.

Sunday was more of the same, with the score tied at 3-3 until the bottom of the ninth, when the Dinos again managed to put across one more run to take the win, ending the series with two wins to the Dinos and a tie.

The Kiwoom Heroes took sixth place after sweeping the Kia Tigers over the weekend, knocking the Doosan Bears down to seventh and rejoining the top six for the first time in a month.

The final sweep of the weekend went to the eighth-place Lotte Giants who swept the Bears over the weekend, taking the first two games 9-1, 4-3, and holding a 3-2 lead in the third game before it was suspended due to rain. With the loss, the Bears have now fallen below a .500 winning percentage.

Off the field there have been some changes this week, with the Heroes releasing designated hitter David Freitas on June 23 and the Wiz dropping Zoilo Almonte to bring in veteran outfielder and former Eagles star Jared Hoying.

Hoying, who appeared for the Toronto Blue Jays as recently as June 19, played for two and a half seasons with the Eagles before being waived in June 2020.

The Twins also look set to make a change. With second-year first baseman Roberto Ramos no longer pulling his weight, the Twins are set to be set to sign Justin Bour, recently released by the San Francisco Giants. Bour, who also played first, has previously played in Japan with the Hanshin Tigers.

A more surprising roster change came when Bears manager Kim Tae-hyoung sent outfielder Park Kun-woo down to the Futures League on June 22, seemingly for disciplinary reasons. Before he was sent down, Park was fifth in the KBO with a .333 batting average, his seventh season in a row hitting over .300.

Park, who is supposed to be a key part of the Korean Olympic team next month, is a formidable extra bases hitter, with a league-topping 180 doubles since 2016.

He's not the only member of the Tokyo team currently languishing in the lower leagues — the Dinos on June 18 sent second baseman Park Min-woo down after his batting average fell to .257, dramatically lower than his lifetime .330 average.