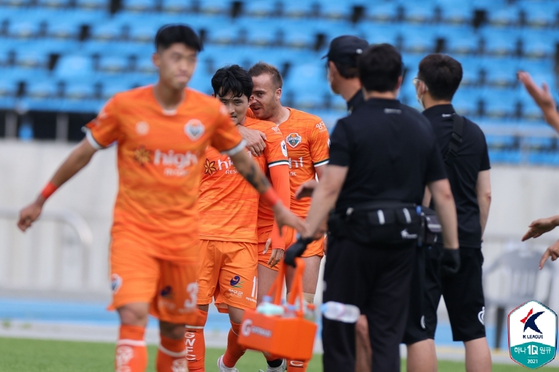 Vladimir Siladi and Cho Jae-wan each scored a goal for Gangwon, in the 45th minute at the 66th minute respectively. Park Soo-il of
Seongnam found the back of the net in the 69th minute, but the Gyeonggi side were unable to repair the damage, with the game finishing 2-1.

With this win, Gangwon puts an end to their nine game winless streak while Seongnam has now not won for nine games. Gangwon stays at eighth and Seongnam at 10th on the K league 1 table.

The Saturday match was one of the K League 1 fixtures rescheduled because they were postponed in early May due to a Covid-19 outbreak. Three rescheduled games are to be played on July 14 and July 28, when the Pohang Steelers face Seongnam and FC Seoul take on Jeonbuk Hyundai Motors.