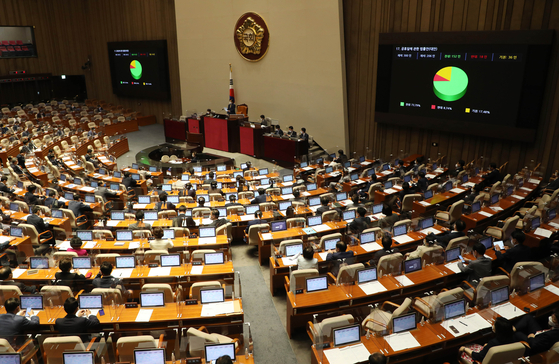 Lawmakers votes in favor of the bill that allow all holidays that fall on a weekend to be celebrated on a weekday at the National Assembly in Seoul on Tuesday. The new rule will be applied starting with National Liberation Day on Aug. 15, which falls on a Sunday. [YONHAP]

This year, all holidays that fall on a weekend will be celebrated on a weekday.

That will give workers four more days of vacation than if the rule had not been changed.

Lawmakers on Tuesday passed a bill that designates weekday holidays for all public holidays that fall on weekends.

The first day in which the rule applies will be Korea’s Liberation Day on Aug. 15, which falls on a Sunday. The substitute day off will be on Monday.

Christmas also falls on a weekend. Dec. 25 is on a Saturday.

Until now, the only holidays swapped for a weekday were Lunar New Year, Chuseok and Children’s Day.

To boost spending, the government granted a weekday Liberation Day holiday in 2015 and 2020.

The designations back then were through presidential decree as in both cases the economy was heavily hit by a virus infection – Middle East respiratory syndrome (MERs) in 2015 and Covid-19 in 2020.

The changed holiday rule will not be applied to small businesses with five or fewer employees.

The ruling party, which has been pushing for weekday holidays, estimated the additional holidays will create 4.2 trillion won ($3.7 billion) in economic benefit and daily consumption of 21 trillion won while adding 360,000 jobs.

According to a report by the Hyundai Research Institute, hotel, transport, restaurant and entertainment businesses will be the main beneficiaries.

In announcing its growth target for this year, which on Monday was raised from 3.2 percent to 4.2 percent, the government emphasized the expansion of the domestic market by encouraging spending.

The business community strongly opposed the additional holidays, as they affect production and increase labor costs, especially for small companies.

Starting last year, companies have had to pay employees on national holidays. This rule applies to smaller operations of 30 or fewer employees starting next year.

Companies complain that they are already struggling under regulations.

Starting this year, businesses with between 50 to 300 employees will be subject to the 52-hour workweek.

The shorter working hours will be extended to any business with more than five employees starting July 1.

As a result of the new rules, some smaller business will have to hire additional workers.

Before the vote on Tuesday, some of the lawmakers argued that the extra holiday should be mandatory even for small business with fewer than five employees.

Lee Young of the main opposition People Power Party argued that the extra holiday legislation was rushed through and should have been worked on more meticulously.

“Designating the holidays in the second half should have been decided in a cabinet meeting led by the President,” Lee said.

Kang Eun-mi, Justice Party lawmaker said that leaving out workers at businesses with fewer than five employees is discriminatory.