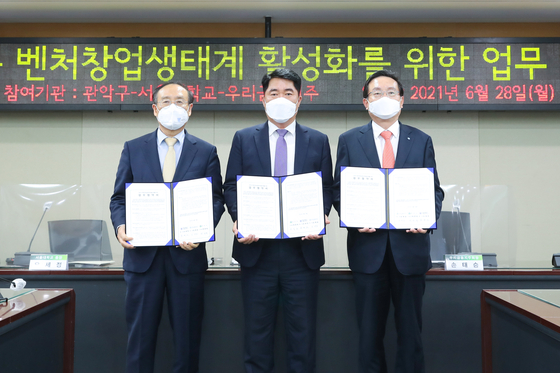 Woori Financial Group on Monday inked a memorandum of understanding with the Gwanak District Office and Seoul National University to support start-ups in the area, the financial group said Tuesday.

The university is in Gwanak District.

In the partnership, the financial group will open a dedicated 890-square-meter (9,580-square-feet) space for start-ups in Sillim-dong, Gwanak District, in September. The new center will use a standalone five-story building with a number of meeting rooms, independent office space for start-ups that will move into the center and a rooftop lounge.

The new center will focus on nurturing start-ups specializing in artificial intelligence, robotics, mobility technologies as well as environmental, social and governance-related technologies.