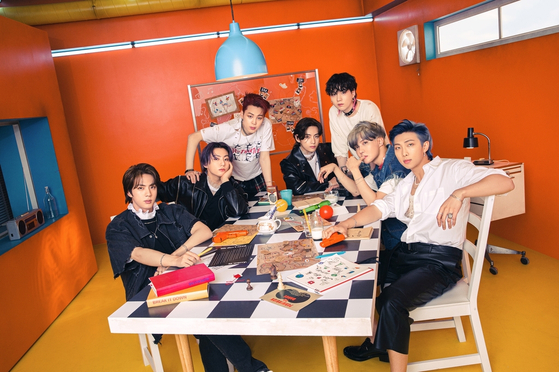 
BTS’s latest English single “Butter” topped the Billboard Hot 100 for five consecutive weeks, breaking their record for a single song to retain its No. 1 place in the singles chart.

“Butter,” which shot to No. 1 in the Hot 100 since its first week of release, already surpassed the record set by BTS’s “Dynamite” last week, which topped the chart for four weeks when it was released last year.

From a total of 54 songs which debuted No. 1 on the chart, only 11 songs remained No. 1 for five or more consecutive weeks. For bands, “Butter” is only the second to achieve such a feat, after “One Sweet Day” by Mariah Carey and American boy band Boyz II Men, which topped the chart for 16 consecutive weeks since its release in 1995.

As for this year, the record for “Butter” is second only to “drivers license,” a debut single by American singer-songwriter Olivia Rodrigo which topped the chart for eight consecutive weeks.

After the news hit, members wrote in the fan community app Weverse in Korean thanking the fans. “Wow, to be No. 1 for five weeks, I’m so grateful. I’m experiencing wonderful things thanks to ARMY [fan club]! I love you,” wrote Jin.

“I’m so happy, but five weeks is a little scary […] I love you ARMY! Thank you and let’s enjoy it!” wrote Suga.

The music video for “Butter” also surpassed 400 million views on YouTube Monday evening, its music label Big Hit Music announced Tuesday. This is the band’s 13th music video to exceed that mark. The video also holds five Guinness World Records, including the most number of views on YouTube within 24 hours of its release and the most-viewed YouTube music video by a K-pop group in a day.