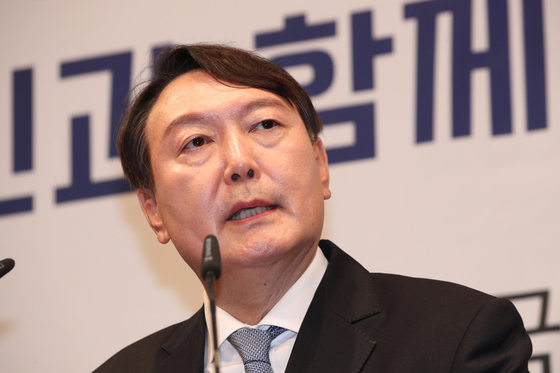 Yoon, 60, held a press conference Tuesday afternoon to declare his presidential bid, 117 days after he quit as prosecutor general to protest President Moon Jae-in’s campaign to weaken the powers of the state prosecution service.

“I will bring back the value of fairness that penetrates liberal democracy, rule of law, for our time and all generations,” Yoon said in a news conference at the Yun Bong-gil Memorial in southern Seoul. 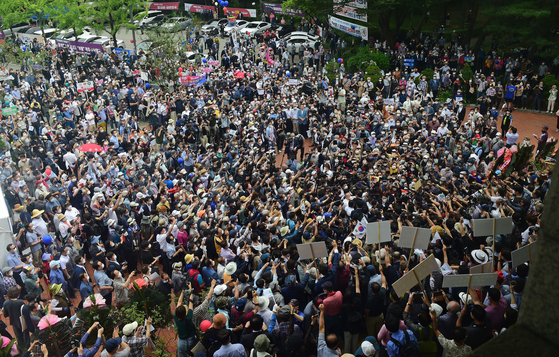 Yoon said it is impossible to expect fairness, liberal democracy and innovation from the Moon administration, which has bluntly violated the law in full view of the people. “If the ruling party wins another presidency, it is obvious what kind of a future this country will face,” he said.

Yoon said a cartel of a few Moon loyalists has monopolized  power and built a chain of command with no sense of responsibility or ethics. “They now want to extend their rule to further plunder the people,” he said.

Yoon asked voters to support him in the March 2022 presidential election to “stop a candidate backed by this corrupt, incompetent administration from winning a presidential victory."

“This administration, protected by a majority in the National Assembly and a cartel [of Moon loyalists], is powerful,” he said. “That is why we must unite, even if we have differences, as long as we share one same belief: that we must normalize this country and make the people its true owners through a presidential victory. When people with different beliefs are united, we become stronger. Only then, will we win.”

Yoon admitted he has no political experience, but stressed his 26-year career as a public servant. “I have first-hand experience that it is not easy to uphold the values of law and justice and liberal democracy,” he said. “The people have seen what I went through to defend justice and the rule of law.”

Yoon said he is ready to sacrifice himself for the future of the people and the country. “I will accomplish this goal by working together with the people who want to end the current administration,” Yoon said.

Following his speech, Yoon took questions from reporters. Asked if he will join the main opposition People Power Party (PPP), Yoon said, “From the perspective of political philosophy, I share my beliefs with the PPP.”

Asked if he will form an anti-Moon administration alliance with Choe Jae-hyeong, former head of the Board of Audit and Inspection, who resigned Monday possibly for a presidential run, Yoon said he did not have an immediate answer.

After quitting as prosecutor general on March 4, which was considered a slap in the face to the Moon administration, Yoon has soared in polls predicting next year's presidential race, overtaking top politicians from the ruling party.

Shortly after taking office in May 2017, the new liberal president handpicked Yoon, who suffered a series of demotions during the administration of Park Geun-hye, to head the Seoul Central District Prosecutors’ Office. He oversaw investigations and indictments of two conservative former Presidents Park and Lee Myung-bak and was prompted to prosecutor general in July 2019.

His relations with the administration quickly soured after he sanctioned probes of key Moon allies, particularly former Justice Minister Cho Kuk and his family.

Asked what he thought about presidential pardons of Lee and Park, Yoon said he agrees with some arguments that they should be released from jail.

“Presidential pardons are not an issue of law,” Yoon said. “It is a political decision based on public sentiment... It is a matter to be decided by the current president.”

Yoon, however, said he understands that Lee and Park are getting old and some people want their releases. “And I can say I agree with their thoughts up to a certain point,” he said.

Asked about a possible pardon for Samsung Electronics Vice Chairman Lee Jae-yong, Yoon said he will likely be paroled, since Lee has served a significant part of his jail term. “It will be done according to procedure,” he said.

Yoon also said he will face any scrutiny if the accusations have substantial grounds. “A candidate for an election must submit to unlimited vetting for capabilities and ethics,” he said. “If anyone questions my ability and ethics with proper grounds, I will answer in detail.”