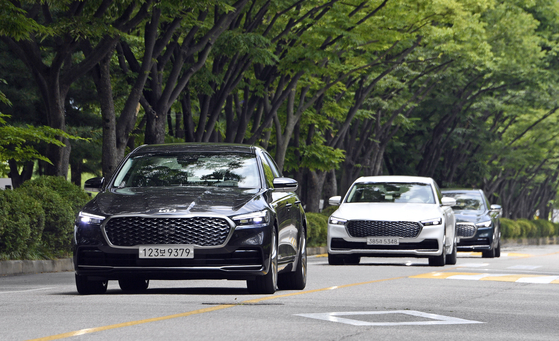 
Kia has gone for substance over style in the latest update to its K9 sedan, keeping practically the same design but offering a major upgrade on the software side.

Kia recently launched a partially revamped version of its biggest sedan, the K9, for the first time in three years. The Korea JoongAng Daily got behind the wheel of the 3.8-liter petrol engine version to drive a 90-kilometer (56-mile) round trip to Pocheon, Gyeonggi.

A set of six icons that show up on the digital cluster behind the steering wheel first caught the reporter's eye, with each one informing the driver about the conditions on the road including traffic and upcoming slopes, curvy roads, speed bumps and speed cameras.

As soon as the car got rolling, the icon that suits the condition of the road ahead lit up.

While they might seem like an another set of showy yet unnecessary digital features that only make controlling the car complicated, these icons were actually part of what’s called the Predictive Gear-shift System that not only notifies the driver of what lies ahead, but also automatically changes the gear by utilizing data collected from sensors, cameras and the navigation system. 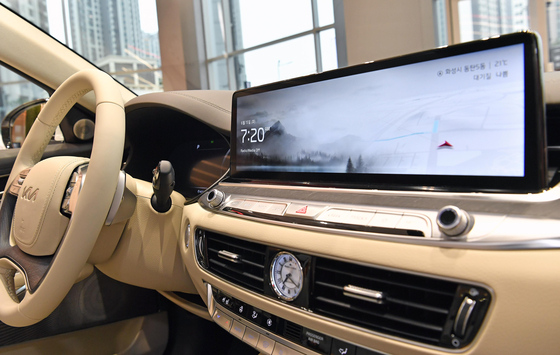 Kia claims the autonomous gear-shift system is the first of its kind.

The system was noticeable especially when there were speed cameras on the road. While it didn't artificially control the car’s speed on its own, it was ready to kick in and downshift the gears if the driver had to quickly slow down to adjust their speed.

The acceleration also becomes sluggish when the car is still in the range of the speed camera.

The system's intervention was also obvious when entering the highway, where cars usually have to speed up quickly. When stepping on the accelerator, the vehicle dashed forward with a loud exhaust sound as if it was on a “Sport” mode.

“The system, which is developed purely based on software upgrades without any additional components, can be tuned in based on the car’s character or the driver’s character,” said Jeon Byeong-wook, a research fellow at Namyang R&D Center.

“K9 customers are usually those looking for a comfortable ride, so we made the system less noticeable. We are planning to install the system on other models as well and it will have different characteristics when installed on, for instance, Kia’s high-performance Stinger or Hyundai’s Veloster N.”

The system activates when the car is set to the “Smart” driving mode, allowing it to be turned off for those who doesn’t want the car to intervene as much.

For those who want more intervention from the system, there is also a “Highway Driving Assist” system that offers partially autonomous driving.

With the click of a button on the steering wheel, the driver can set the desired speed and distance from the car in front, and the car will start driving on its own.

As long as the driver regularly puts their hands on the steering wheel, the car can speed up and slow down on its own depending on the road situation. With the use of the turn signal, the car can even be told to change lanes on its own.

Thanks to this function, this reporter could send texts, read and write emails while driving on congested highways with hands and feet free from the vehicle. 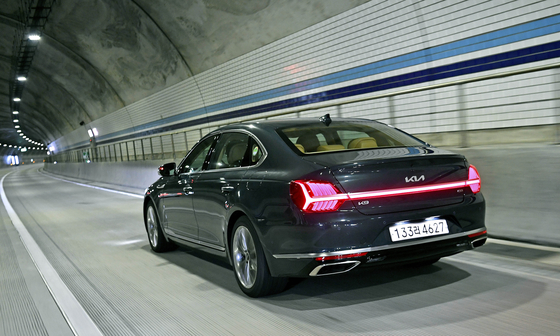 Design-wise, the new K9 has a similar vibe to previous versions, except that it comes with Kia’s new logo and a horizontal rear lamp that extends to each side of the car. The large grille is still there, but has a V-shape pattern for a more luxurious look.