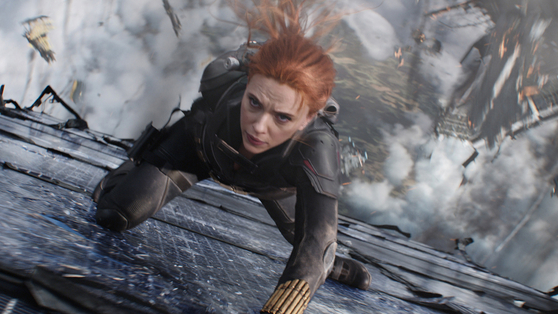 
It's a debut and a send off all in one, as Marvel finally gives Scarlett Johansson's Natasha Romanoff character her own film.

In "Avengers: Endgame," (2019) Natasha dies sacrificing herself for an Infinity Stone that could defeat Thanos and save the world. Fans were left to wonder about the enigmatic beauty they hardly got to know.

"Black Widow," which opens in Korea July 7, is the vehicle that ties up the loose ends, a prequel that parachutes into Marvel Cinematic Universe (MCU) between "Avengers: Infinity War" (2018) and "Captain America: Civil War" (2016) to get us up to speed with a character killed off before she was fully explained.

It's a stretch, but in the MCU, anything is possible, even a posthumous do-over.

Although there have been hints about Natasha's past, such as allusions to the Red Room, where the KGB trained young girls to become Black Widow assassins, or reminiscences about her mission in Budapest with Clint Barton, the Russian spy has mostly kept a poker face about her history and her feelings towards her Avengers family.

When others ask why she stays and continues to work with the Avengers, she answers that she does it to "clean red from my ledger," atoning for her sins as a Black Widow. It is only in "Endgame," as half of the world's population and the Avengers are wiped from the Earth, can we really see how much she cared for her Avengers family — enough to sacrifice herself to save them.

With that backstory, the audience understands how devastated Romanoff must have been when her Avengers family scattered after “Civil War." We could see that she’s vulnerable, and it is only then we are able to peer into her past.

The audience gets just a glimpse into her childhood, when the KGB had 10-year-old Natasha live with her family undercover in Ohio for three years, with Alexei Shostakov (played by David Harbour), the Red Guardian also known as the Russian super soldier, as her father, Melina Vostokoff (played by Rachel Weisz) as a Black Widow and her mother, and Yelena Belova (played by Florence Pugh) as her kid sister and a Black Widow.

In an attempt eradicate  once and for all the system that created them, Yelena enlists Natasha’s help, and eventually the whole family rallies around the “girls,” to kill Dreykov, the head of the Red Room.

The audience will also get to find out what has haunted Natasha, driving her to rid her ledger of all the red after a conversation with Loki in “Avengers” (2012) when he said: “Can you wipe out that much red? Dreykov’s daughter? Sao Paulo? The hospital fire?”

As Johansson said during an online event with the Korean press last week, Natasha’s strength comes from accepting her vulnerability. She’s used her vulnerability as a weapon a couple of times in the MCU series during interrogations, but she has also made it known that even a superhero needs a family, and that theme continues in this film.

And a family doesn’t necessarily have to be one of flesh and blood, or stay together at all times, for it to be one. As Johansson said, it has always been about the family we choose to be with at the end of the day.

The film celebrates all such revelations and delivers them especially well via the chemistry between the two sisters. Pugh's Yelena is more chill and humorous than her serious sister. One of her noticeable characteristics throughout the film is dry humor even in the most dire moments — and the rapport these two very different sisters have throughout their action sequences provides more of the fun and entertainment that distinguishes Marvel films.

Despite the non-stop action, humor, and more action, the ultimate goal of destroying Dreykov didn't quite have the pull of quests in other Marvel films, especially after facing seemingly-omnipotent villain Thanos in “Infinity War” (2018) and “Endgame.” The film also lacked a clear enough connection, and references to, the larger MCU timeline, which was a strength of other solo "Avengers" movies.

Johansson has suggested that this will be it for Romanoff.

"It feels great to leave a party when it's still raging," she told Comicbook on June 24. "I feel really happy with the work that we've done for this decade of time and, you know, it's bittersweet to say, 'Goodbye,' but if you love something, you need to set it free!"

The character's solo movie may have been long overdue, but it may also have been just the right time for it, as the character had just come to terms with her history and her family. Her priorities were established and her loyalties set, which is how she was able to sacrifice herself without hesitation when the time came.

It also offered disbelieving and devastated fans some answers after the character's death in “Endgame.”

The post-credit scene hints that Yelena will be joining the MCU still mourning her sister’s death, tasked with a mission by an unidentified force to kill Barton, who she believes is responsible for Natasha’s death.