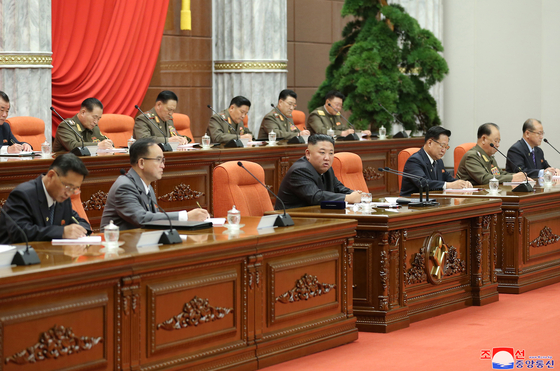 The English-language KCNA report quoted Kim as saying that "senior officials in charge of important state affairs neglected the implementation of the important decisions of the Party on taking organizational, institutional, material, scientific and technological measures as required by the prolonged state emergency epidemic prevention campaign associated with the worldwide health crisis."

This, said Kim, "caused a crucial case of creating a great crisis in ensuring the security of the state and safety of the people and entailed grave consequences."

The report did not elaborate.

North Korea officially claims it has no confirmed Covid-19 cases. It has implemented stringent border controls and other sweeping quarantine measures severing most of its contact with the outside world since January 2020.

The KCNA report said the Politburo meeting Tuesday was to "deal with some leading officials' dereliction of duty in implementing the major policy task" of the Workers' Party and also "provide a fresh turning point in the personnel administration."

The officials were accused of "extreme negligence and deliberate idleness," adding that their "chronic irresponsibility and incompetence" do "tremendous harm to the development of the revolutionary work" of the party.

The meeting also "dealt with an organizational issue," reported the KCNA, electing new Politburo members and recalling and electing a new secretary of the Workers' Party's Central Committee. It didn't elaborate further.

Earlier this month, Kim convened a four-day plenary meeting of the Workers' Party, giving its first response to the Joe Biden administration's policy on North Korea, along with dealing with domestic issues such as food shortages.

It was unusual for Pyongyang to admit to setbacks in its Covid-19 quarantine efforts.

North Korea told the World Health Organization (WHO) earlier this month it tested more than 30,000 people for Covid-19 through June 10 but had yet to find a single infection, according to a WHO report last week.

A WHO monitoring report on June 22 said that North Korea's figures included 733 people who were tested on June 4 and 10, of which 149 had influenza-like illnesses or severe respiratory infections.

Last summer, Pyongyang accused a 24-year-old man who defected in 2017 and swam back to the North near Kaesong on July 19 of being infected with Covid-19. North Korea convened an expanded meeting of the Politburo on July 25 to respond to the "emergency" situation.

Seoul officials said he had not been infected with the virus, according to its monitoring and contact tracing system.

An official from Seoul's Ministry of Unification told reporters Wednesday on North Korea's report, "It is difficult to predict what direction North Korea will take at this point because it hasn't disclosed the specific situation. We will need to watch for follow-up measures."

However, such measures could include "tightening internal discipline," pointed out the official.

North Korea has been assigned 1.99 million doses of Covid-19 vaccines by the Covax Facility, the WHO-led global vaccine-sharing mechanism. However, it has faced delays receiving the doses partly due to supply shortages.

The North Korean delegate criticized some countries for "unfairly" hoarding coronavirus vaccines at the 74th World Health Assembly at the end of last month, apparently targeting the United States.

In Austria last week, President Moon Jae-in said that if North Korea agrees, he will "proactively" push for cooperation on Covid-19 vaccine supplies as the South envisions becoming a global vaccine hub.