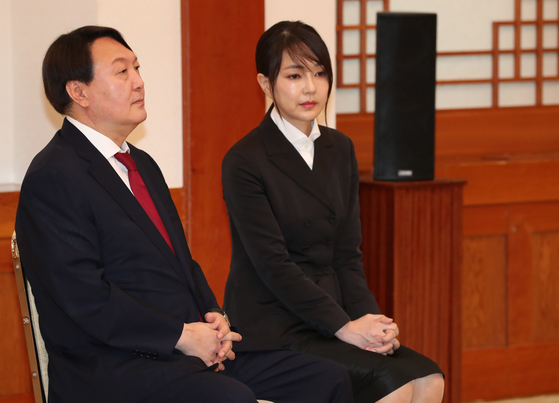 
Former Prosecutor General Yoon Seok-youl's wife has denied rumors that she used to work as a hostess at a hotel nightclub before getting married.

Kim Keon-hee, who married Yoon in 2012, in an interview with Newsverse on Tuesday denied a series of allegations surrounding her past. The interview took place on the same day that Yoon held a press conference and announced his run for the March 2022 presidential election.

According to the report, Kim, president of an art event planning company Covana Contents, denied all rumors about her past in an emotional voice for about 40 minutes in a phone interview.

Over the past weeks, a document called "Yoon's X-file" has been spreading around the internet, including YouTube, listing a series of allegations surrounding her.

One of the major allegations included in the file was that Kim had worked as a hostess, nicknamed Julie, at a hotel nightclub in southern Seoul, before marrying Yoon. It also said she had formed intimate relationships with prosecutors and first met Yoon at one of these nighttime establishments.

"It is nonsense that I was Julie and a hostess at a hotel," Kim was quoted as saying by Newsverse. "Rumors said I worked there for years and I was a top-rated hostess. But I am not such a beauty. I am more like a workaholic. I studied for two master's degrees and a doctoral degree, lectured at a university and ran a business. Even if I wanted to work as Julie, I had no time."

Calling the rumor "a fiction," she said the media must investigate the men who had claimed to have met her at a nightclub.

She also denied an allegation in the X-file that she was once a mistress of a prominent prosecutor. "I lived in my house, and I had housemates," she said. "How can I live with someone?"

She also said the public servants' community in Korea is a very small and tough place. "Does this mean that the prosecutor [in the rumor] was a fool?" she asked. "This is just an attack [on my husband]."

Kim also denied the rumor that her overseas travel records had been deleted to conceal her past. "One reporter once asked me such a question in the past," she said. "So I asked him whether he knew a way to erase such records using state powers."

"I was a wife of a public servant for about nine years," she continued. "And society is played by lies, and people have misconceptions. But facts are facts, and the truth will eventually be laid bare."

This was Kim's first media interview about the rumors of her past. When Yoon was asked if he had seen Kim's interview, he said Wednesday that he had not seen it.

Yoon has said groundless allegations are being spread to smear him and his family, but maintains that he has no skeleton in the closet, confronting claims by ruling party politicians that they are in possession of secret information that could destroy any shot he has at becoming president.

In his press conference announcing the presidential bid on Tuesday, Yoon also said he will face any scrutiny if the accusations have substantial grounds. "A candidate for an election must submit to unlimited vetting for capabilities and ethics," he said. "If anyone questions my ability and ethics with proper grounds, I will answer in detail."

Little is known about Kim, 49. She married to Yoon in 2012 and the couple has no children. According to government data from 2019, when Yoon was named as the prosecutor general, he reported 5.19 billion won ($4.6 million) in savings, including 4.97 billion won owned by Kim. Yoon also reported that Kim owned a residential and commercial building in Seocho-dong, southern Seoul.

While Yoon and Kim denied the rumors, former Justice Minister Choo Mi-ae, who had announced her presidential bid to represent the ruling Democratic Party (DP), said Wednesday that she knows Yoon and Kim do, indeed, have a skeleton in their closet.

"When I was the justice minister, I conducted investigations, and there were serious problems," Choo said in an interview with YTN radio. "The prosecution is already conducting an internal probe. When Yoon was the prosecutor general, prosecutors could not investigate him properly or indict him because they feared him."