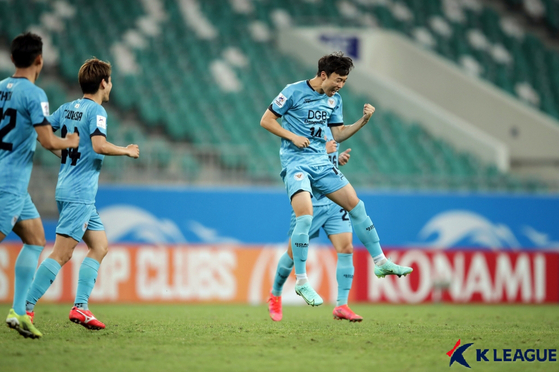 Daegu FC's An Yong-woo celebrates after scoring a goal against United City at Bunyodkor Stadium in Tashkent, Uzbekistan on Tuesday. [NEWS1]


Daegu FC took a huge 7-0 win United City FC at the AFC Champions League on Tuesday, jumping up to second place in a tough group that also includes Beijing Guoan and Kawasaki Frontale.

Daegu were on explosive form in their second Group I game of the tournament, netting three in the first half — Cesinha in the 23rd minute, Edgar Bruno da Silva in the 42nd and Kim Jin-hyuk three minutes into injury time — to take a decisive lead going into the break.

An Yong-woo cemented Daegu's lead in the second half, scoring two in the 62nd and 72nd minutes, with Park Han-bin adding a sixth goal in the 90th minute. The final goal went to Jeong Chi-in, who scored a penalty five minutes into injury time.

With the 7-0 win, Daegu joins the short list of teams that have won an AFC Champions Game by a margin of seven goals or more. Three other Korean teams are already on the list: Seongnam Ilhwa Chunma, now Seongnam FC, hold the record for the biggest win in Champions League history, beating Persik Kediri 15-0 in 2004, Busan IPark beat Binh Dinh 8-0 in 2005, and Jeonbuk Hyundai Motors beat Persipura Jayapura 8-0 in 2010.

Daegu's achievement is made more impressive by their previous history at the AFC Champions League. Unlike teams like Jeonbuk, Daegu are not a continental powerhouse, and this is only their second appearance at Asia's top tournament. They previously qualified in 2019, winning three games and losing three games without making it out of the group stage.

Even this year, Daegu only qualified for the tournament on a technicality. After finishing the 2020 K League 1 season in fifth place, Daegu should not have earned a chance to compete. It was only after fourth-place finisher Gimcheon Sangmu FC was relegated to the K League 2 — under league rules that force a team to drop to the second tier if it changes its host city — that Daegu earned a shot.

Sangmu moved from Sangju to Gimcheon, so lost its place in the top tier and in the Champions League.

Daegu will now take on Beijing on Friday to complete the first leg of the group stage, with Kawasaki facing City United on the same day.

Elsewhere in the Champions League, Ulsan Hyundai have risen to the top of Group F after winning both of their games so far, 1-0 against Viettel on June 26 and 2-0 against BG Pathum United yesterday.

The Pohang Steelers have already played three games, winning two and drawing one to sit in second place in Group G. Pohang beat Ratchaburi FC 2-0 in the opening game of the East Asian leg of the Champions League on June 22, before going on to a difficult 3-0 loss with 10 men against Nagoya Grampus on June 25.

Their final game against Johor Darul Ta'zim was a big 4-1 win on Monday.

Jeonbuk, the final Korean team in the Champions League, have played two games, winning one and drawing one to take second place in Group H. Jeonbuk beat Chiangrai United 2-1 on June 26, before tying with Gamba Osaka 2-2 yesterday.

The Champions League group stage will continue over the next two weeks. Ulsan will continue their campaign against Kaya FC on Friday. Pohang will face Johur in a second leg game on Thursday, when Jeonbuk will play Tampines Rovers for the first time.

All group stage games will be finished by July 11 and the knockout round will begin on Sept. 14.