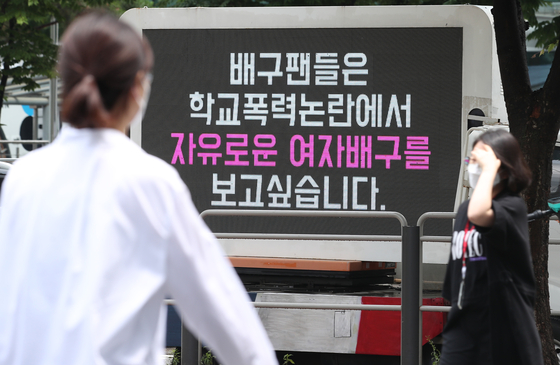 A protest is held near the Korea Volleyball Federation office in Sangam, western Seoul, on Wednesday against the return of Lee Jae-young and Lee Da-young, who were suspended indefinitely from the Heungkuk Life Insurance Pink Spiders after allegations of bullying. [NEWS1]


Twin volleyball players Lee Jae-young and Lee Da-young, who were indefinitely suspended in February following accusations that they bullied their teammates when they were in middle school, will not return to the Heungkuk Life Insurance Pink Spiders, the club announced Wednesday.

The sisters were embroiled in a scandal in February, when a former middle school teammate of the pair accused them of being bullies when in school, listing 21 specific allegations including claims that one of the sisters threatened her with a knife.

The Korean national team indefinitely suspended the pair and also banned them from ever holding coaching positions.

The sisters apologized for their "irresponsible behavior," while refuting some of the claims. They were both forced to sit out the remainder of the 2020-21 season, with the Pink Spiders slipping into second place in the league following the loss of the two star players.

After the Pink Spiders General Manager Kim Yeo-il reportedly told the board of directors of the Korea Volleyball Federation on June 23 that the two players will be registered for the 2021-22 V League season, public opinion flared up again with the backlash worsening over the last week as interviews of the alleged victims were reported. The club eventually dropped the plan to register the pair.

Retrospective accusations of school bullying have become common in Korea, with a number of high profile celebrities accused of mistreating former classmates when they were young. Organizations have acted quickly to punish the perpetrators amid considerable backlash from members of the public who think that their success sets a bad example.

"We apologize to our fans who love volleyball," a statement from the Pink Spiders said Wednesday, the deadline for registering athletes for the 2021-22 V League season. "The club has decided not to register the two athletes this season as it seems inappropriate for them to be playing on the court at this stage."

As they are no longer part of the Pink Spiders, the sisters are now free agents and will not be bound to the club's indefinite suspension orders any more. Although they haven't been included on the entry of any team in Korea for the coming season, the twins are theoretically free to continue playing overseas.