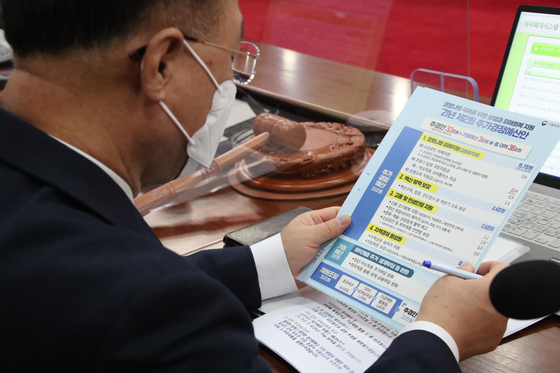 Finance Minsiter Hong Nam-ki consults data on the latest supplementary budget while attending a cabinet meeting at the government complex in Seoul on Thursday. [YONHAP]

Emergency relief grants of at least 250,000 won ($220) will be showered on Korean households, except those in the top 20 percent income brackets.

The government on Thursday announced this detail and others of its 33 trillion won supplementary budget, the sixth since the start of the pandemic and the second biggest ever.

The budget will be submitted to the National Assembly for review on Friday.

Some 15.7 trillion won has been earmarked for Covid-19 stimulus, including 10.7 trillion won for the emergency relief grants and an additional subsidy for the lowest income earners; 3.9 trillion won to help small businesses hurt by social distancing regulations; and 1.1 trillion won for a cash-back program to encourage spending.

As with the first emergency relief grants given last year, the grants will be distributed via credit and debit cards or through prepaid cards.

All together, poor families of four will get 1.4 million won.

The 1.1 trillion won cash-back program is open to everyone, with maximum payouts of 100,000 won per month, and is meant to boost domestic spending.

If an eligible family spends more on credit cards than in the second quarter, they will get cash back equivalent to 10 percent of the additional spending. The cash-back program will run for July, August and September.

However, spending at discount marts such as Emart, Lotte Mart, department stores, online shopping malls as well as at hostess bars and for auto purchases will be excluded.

Finance Minister Hong Nam-ki emphasized Thursday the government’s desire to boost consumer spending, which would be the biggest factor in achieving 4.2 percent growth this year, the government's target.

“Some have asked if such grants are necessary as the economy is rapidly recovering and consumer spending has been growing,” Hong said. “[While] exports and investment have seen significant recovery to pre-Covid-19 levels, consumer spending ... dropped sharply last year, and we need policies that will reinforce spending.”

Small businesses that saw significant declines in sales due to restrictions for public health reasons will get aid of up to 9 million won from the extra budget.

Subsidies for small businesses implemented earlier this year had a ceiling of 5 million won.

Three types of businesses are eligible: those that were forced to stop operating due to social distancing regulation, those whose businesses were curtailed, and those that are "in crisis."

Businesses that had to close include so-called room salons and dance clubs; those that had revenue declines because of public health restrictions include coffee shops and restaurant; while the crisis category includes businesses that saw significant declines such as travel agencies.

The government estimates 1.13 million businesses are eligible for the subsidies, including 200,000 owners of so-called room salons.

Room salons and dance clubs were excluded from the previous government subsidies.

Some 4.4 trillion won of the budget will be used for vaccine purchases as well as inoculations and testing.

Up to 2.6 trillion won will be used to create jobs, fund vocational training and subsidize airlines and travel agencies to keep employees instead of laying them off. The extra budget will also be used to support culture, the arts and the tourism industry.

The extra budget will also be used in welfare programs including energy vouchers for 187,000 low-income families.

An additional 12.6 trillion won will be spent to support regional economies.

The government stressed that the supplementary budget would not require any additional bonds to fund.