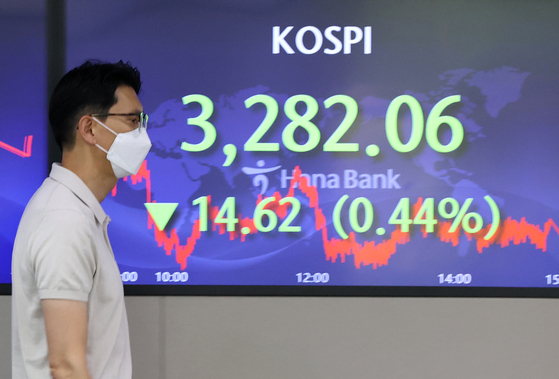 A screen in Hana Bank's trading room in central Seoul shows the Kospi closing at 3,282.06 points on Thursday, down 14.62 points, or 0.44 percent, from the previous trading day. [YONHAP]


Stocks retreated Thursday amid concerns of new coronavirus variants that weakened investor appetite for risky assets. The won fell against the dollar.

The secondary Kosdaq index advanced 0.55 percent, or 5.68 points, to close at another historic high of 1,035.64 points, thanks to its high portion of bio and pharmaceutical stocks.

Stocks got off to a lackluster start after Korean authorities delayed the easing of the distancing measures in the greater Seoul area by a week, citing risks from the highly contagious Delta strain of Covid-19.

Bio shares advanced in Seoul, while most other large caps slumped.

SK Innovation plunged 8.8 percent to 269,500 won after the firm said it is considering a spin-off of its battery unit.

The local currency closed at 1,133.1 won against the dollar, up 7 won from the previous session's close.

Stocks rise for a second day as inflation worries wane

Earnings prospects lifts Kospi for second day in a row