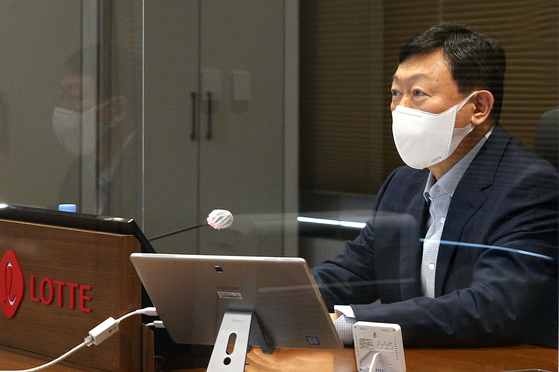 
Lotte Group Chairman Shin Dong-bin told key employees on Thursday to look back on the past and to actively invest in discovering new businesses for innovation.

At the biannual value creation meeting held on Thursday, Shin said that “the future is not an extension of the past,” urging the employees to focus on higher value-added businesses.

The value creation meeting is held to discuss the performance of group companies, analyze the business environment and examine the economic outlook.

In a press release, Shin did not mention Lotte having walked away from acquiring eBay Korea, which was seen as an opportunity for the group to rise as a key e-commerce player.

The Thursday meeting was attended by 130 employees, including the heads of the four Lotte business units: retail, hotel and services, chemicals and food.

Lotte “should offer a new lifestyle by developing meaningful products and services to customers.” Shin added, “the answer is always found at the site where there are customers.”

Another key agenda item discussed during the meeting was to achieve carbon neutrality by 2040 as part of the group’s efforts to strengthen itself in terms environmental, social and governance (ESG) measures.

Lotte said it will create a committee to strengthen ESG management and comply with ESG policies.

Lotte said it will “apply eco-friendly technologies and start eco-friendly businesses” to achieve the carbon neutrality.

The slogan reflects Lotte’s attempt to bring innovation that can benefit everyone through creating sustainable future, it said.

The value creation meeting is usually held in mid-July, but Lotte held it earlier this year in an environment of intense competition.

Growth of Naver Shopping and Coupang, as well as Emart’s recent acquisition of eBay Korea, compelled Lotte to adjust the date, according to local media reports.

Lotte Shopping was one of the bidders considering the acquisition of eBay Korea, but it walked away from the deal, saying it did not think synergy effects created between itself and eBay Korea will be that great compared to its price.

Though it walked away from eBay Korea, Lotte Shopping said it is open to merger and acquisitions with other companies that it thinks will be able to generate synergy effects.