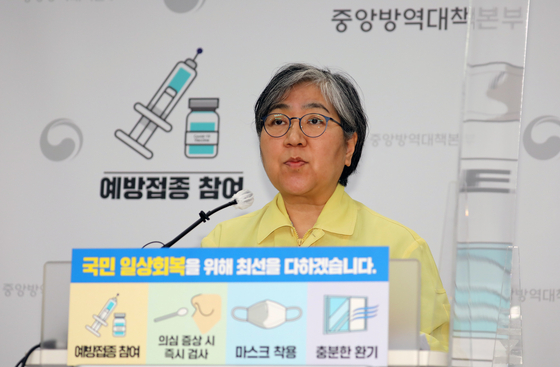 Jeong Eun-kyeong, commissioner of the Korea Disease Control and Prevention Agency (KDCA), announces vaccination plans for July during a briefing on Thursday. [NEWS1]


People in their 50s will be eligible for vaccination with the Moderna shot starting July 26, while the age limit for the AstraZeneca vaccine was raised to 50 and older due to concerns over rare blood clots, according to the Korea Disease Control and Prevention Agency (KDCA) Thursday.

The KDCA unveiled the details of its vaccination plan for July, which covers the public in their 50s, people postponed in June, high school seniors, school staff and large companies.

The government aims to inoculate a total of 36 million people, or 70 percent of Korea's population, by the end of September.

Pfizer jabs will first be offered to around 197,000 people aged 60 to 74 and around 110,000 essential workers under 30 whose vaccine appointments were delayed due to supply shortages in June. Vaccinations will go from July 5 to 17.

The elderly aged 60 to 74 who canceled or postponed their appointments due to health issues will get another chance at vaccination this month from July 26 to 31, this time with the Moderna vaccine. Those who did not show up for their appointments without prior notice, however, are not eligible.

High school seniors and high school teachers — those associated with the all-important college entrance exam in November, known as the College Scholastic Ability Test (CSAT) — will be given Pfizer shots from July 19 to 30. CSAT test takers who aren't seniors will get their first shots in August.

All other teachers — from day care centers through middle schools — will get Pfizer shots from July 28 to Aug. 7.

In order to prevent infections from spreading in the military, vaccinations for conscripted soldiers will also begin from July 12. The country will administer Pfizer shots to new recruits who join the army from July to September.

Finally, inoculations for around 7.42 million people in their 50s will kick off in two phases, and all will be administered the Moderna shot.

Local government offices and large steel and automobile companies that operate around the clock will be able to decide on their own coronavirus vaccination plan from the end of July.

The KDCA also raised the recommended age for receiving the AstraZeneca vaccine from 30 to 50 on Thursday.

The change comes after rare blood clots with low platelets were discovered in two men in their 30s after receiving the shot. One died, and one later recovered.

"After reviewing the benefits and risks [of the AstraZeneca vaccine] by age, the Vaccination Committee found that the benefits clearly outweigh the risks for people at least in their 50s, so we decided to raise the recommended age limit," KDCA Commissioner Jeong Eun-kyeong said during a briefing on Thursday.

Everyone under 50 who already got their first dose of the AstraZeneca vaccine is now urged to get their second one with the Pfizer vaccine instead, starting July 5.

As per the new recommendations, more than 1.61 million people, up from an earlier estimate of 760,000 people, are expected to get mixed vaccines. This includes employees at military and correctional facilities, at-home caregivers aged over 30, medical workers at clinics and pharmacies, essential workers and younger citizens waiting for their second shot.

Around 29.9 percent of Korea's population had received just one dose of a Covid-19 vaccine as of Wednesday midnight, while 9.8 percent had been fully vaccinated.

There were three additional virus deaths, raising the death toll to 2,021.