Kim Kwang-hyun bounces back with first win in two months

Kim Kwang-hyun bounces back with first win in two months 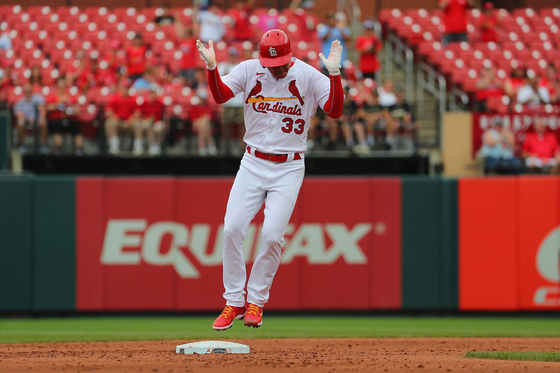 Kim Kwang-hyun of the St. Louis Cardinals celebrates after hitting a two-RBI double against the Arizona Diamondbacks in the second inning at Busch Stadium in St Louis, Missouri on Wednesday. [AFP/YONHAP]


After two difficult months, Kim Kwang-hyun finally snapped his 10-game no-win streak on Wednesday, leading the St. Louis Cardinals to a 7-4 victory over the Arizona Diamondbacks.

Starting on the mound at Busch Stadium in St. Louis, Missouri, Kim allowed one earned run in five innings with three walks and five strikeouts, lowering his ERA to 3.79.

Kim looked confident from the start, striking out Josh Rojas swinging to kick things off, before taking care of Tim Locastro with a flyout. A full-count walk followed by a single put runners at the corners, but Kim remained unfazed, striking out the final batter to end the inning without any runs scored.

A four-pitch walk to Josh Reddick started the second, but a quick flyout, lineout, strikeout combination wrapped up the inning with nothing going. Kim not only took care of things on the mound, but also added his own run support, lacing a two run double to the left field at the bottom of the second to take the early lead.

The third was Kim's only wobble, with a single followed by a hit by pitch quickly putting two runners on base with no outs. The Korean southpaw rallied, with a flyout and a strikeout quickly leveling the playing field. Kim threw two balls and two strikes to Asdrubal Cabrera and was on the edge of getting out of the inning when a single to the outfield brought home the runner from second to give the Diamondbacks a run.

A quick pop out ended the inning with only the one run scoring.

The Cardinals quickly added two more at the bottom of the third, putting them 4-1 and Kim still well on track for that long-awaited win.

Kim made quick work of the fourth and fifth, giving up one walk to start before retiring the next six batters in order. With a solid five innings of work done and the Cardinals up 6-1, Kim headed for the bench at the top of the sixth while Lars Nootbaar took over on the mound.

The Cards added one more in the seventh while the Diamondbacks rallied in the eighth to score three, but Kim's lead was unassailable and the game ended with the St. Louis side up 7-4.

The win has been a long time coming for Kim. After going though his debut season without picking up a single loss, Kim has struggled to enter the win column this year.

Before Wednesday's game, Kim hadn't picked up a win since April 23. He now carries a 2-5 line as the season nears the halfway point.

Kim spent some time on the injured list earlier in the month but appears to have recovered, although his ERA in June shows a significant drop off compared to previous months.

Kim's numbers for 2020 are skewed by the nature of the season, which was dramatically shortened due to the Covid-19 pandemic. Kim didn't start the year as a starter, but quickly took up the role due to holes in the starting lineup, starting in seven of the eight games he appeared in. He ended the season with three wins and no losses and a 2.93 ERA.

This season he has started in 13 games and only managed the two wins, giving him a career 5-5 line in the majors. Yet despite the lack of wins this season, Kim's performance hasn't been especially bad, with his only quality start of the year coming in a no-decision. What Kim has lacked is run support from the Cardinals' lineup, something which obviously wasn't a problem on Wednesday.

"In the past, I never went more than six or seven starts between victories. I set my personal record this year," Kim was quoted as saying after the game by Yonhap. "I kept thinking, 'Maybe I'll win the next time out.' But it went on and on. I wanted to minimize the damage and focus on each hitter today. I think my desperation brought me some good luck."