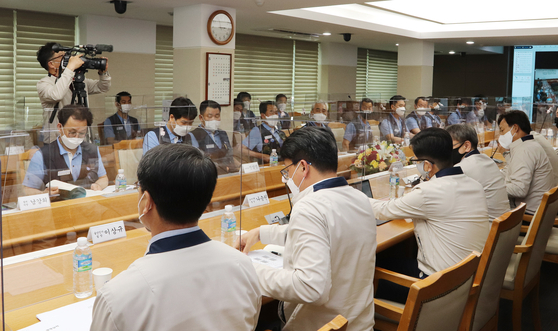 Representatives from Hyundai Motor's management and the unionized workers for this year's wage negotiation meet at the carmaker's Ulsan factory on May 26. [YONHAP]

Hyundai Motor CEO Ha Eon-tae asked unionized workers to cooperate with the company in preemptive wage negotiations in the face of the union's possible walkout for the first time in three years.

Ha also cautioned that comparing the amount of incentives offered to Hyundai employees with those offered in the IT industry is inadequate as the cost fundamentals differ significantly.

“We should be preparing to compete in the future for survival instead of fighting,” Ha said in a letter sent to Hyundai Motor employees on July 1.

Hyundai Motor’s unionized workers are likely to resort to walkouts as both sides have failed to come to an agreement over a wage increase and incentives.

The labor union rejected to the proposal, asking the company to come up with an improved wage plan.

The union had been pushing for a 99,000 won raise in monthly base pay in addition to an extension in the retirement age.

The union is planning to vote on a walkout next week.

Hyundai Motor has been at odds with not only unionized workers, mostly comprising of older blue-collar workers, but also younger white-collar employees and those who work at its R&D center due to dissatisfaction in pay rises over the past few years.

The pay raise for R&D center workers was often compared to those who work at IT companies such as Samsung Electronics and SK hynix, both of which had an average 7 to 8 percent pay rise this year.

“The company’s operating profit dropped 33.6 percent last year with the production of some 70,000 cars disrupted due to chip shortage early this year,” Ha said. “Nonetheless, the company proposed the highest wage level in the last three years and incentives that are worth more than the negotiated amount for last year.”

“We are aware that there are a lot of comparisons in incentives with IT companies on various platforms, but we request clearer judgement as the cost structure in the manufacturing business is fundamentally different from IT industries.”

Incentive rates have been on a downward trend at Hyundai Motor for the past few years. In 2014, the incentive rate reached its peak at 450 percent and slid to 350 percent in 2016. Last year, it was 150 percent.