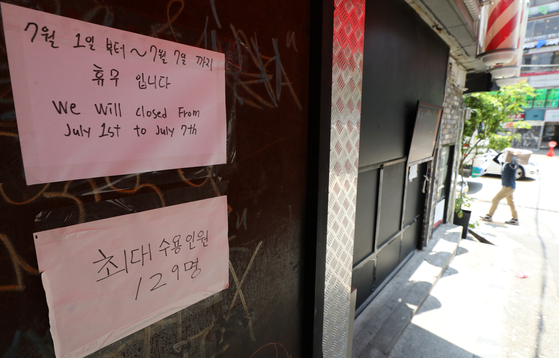 A club in Hongdae in Mapo District, western Seoul, posts a sign that states it will be closed for one week on Friday. The Mapo District Office said it will be conducting a special inspection of the Hongdae area for the next two weeks to make sure quarantine measures are being implemented properly amid a cluster of Covid-19 infections linked to pubs and restaurants in the area. [NEWS1]


As Korea's daily Covid-19 cases surged to over 800 Friday, the highest infections in nearly half a year amid concerns over the spread of a more contagious variant, Seoul’s Mapo District will be conducting a special quarantine inspection of Hongdae, the latest virus hot spot.

The Mapo District Office said that it will be cooperating with the police to inspect 1,200 restaurants, cafes and bars in the Hongdae area in western Seoul over the next two weeks through July 14. An inspection team will visit these restaurants and pubs to instruct business owners to voluntarily comply with quarantine efforts and to make sure government measures, such as a ban of gatherings of over four people and mandatory mask-wearing, are being properly implemented.

The move follows a cluster of infections tied to foreign teachers at English-language hagwon (cram schools) in the greater Seoul area who had visited restaurants and pubs in the Hongdae area, which reached 242 cases so far.

Health authorities have said that the more contagious Delta variant, common in India, was found in this cluster which has led to infections in several English hagwon in Gyeonggi cities including Seongnam, Bucheon, Goyang and Uijeongbu.

Businesses that are caught violating quarantine measures could be fined up to 1.5 million won ($1,300) or forced to close for at least one week.

There were three additional deaths, raising the total death toll to 2,024.

This marks the highest number of daily cases since 869 infections were reported on Jan. 7.

The figure is up from 762 cases Thursday. The previous week saw cases in their 500s and 600s, with a previous weekly high of 794 on Wednesday.

Of domestic cases, 337 were in Seoul, 260 in Gyeonggi and 22 in Incheon. Infections in the greater Seoul area account for 80.9 percent of total cases in the past week, health authorities said.

There were 61 imported cases, including 27 from Indonesia and nine from Uzbekistan.

Health officials said there are several factors for the uptick in cases, including the spread of variant cases and people become more active, but lax toward social distancing measures, amid summer break season.

Prime Minister Kim Bu-kyum said Friday, “The government will work closely with local governments to be able to raise the level of social distancing at any time, while seeking additional effective quarantine measures.”

He pointed out that 90 percent of the highly contagious Delta variant infections were taking place in the greater Seoul area, and also expressed worry over the spike in cases in the active young population, warning that the country was on the verge of a "critical crisis."

Because of the spike in cases earlier this week, health authorities delayed the implementation of eased social distancing measures by one week to July 7 in the greater Seoul area.

Jeong Eun-kyeong, commissioner of the Korea Disease Control and Prevention Agency (KDCA), in a briefing Friday warned, “The situation in the metropolitan area is very dangerous and serious."

She likewise warned that if the Delta variant is not curbed early, it could lead to another wave of infections, noting countries like Britain, Israel and the United States which have seen the Delta variant become the dominant strain.

As of Friday, 29.9 percent of the total population, or 15.34 million people, have received at least their first shot of Covid-19 vaccines.

Distancing measures to continue as-is for another 2 weeks