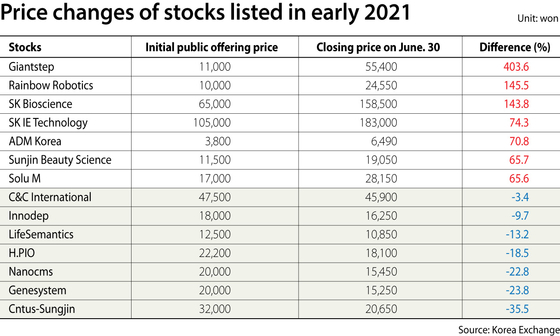 Initial public offerings (IPOs), which are often seen as easy money for investors, have turned out to be a mixed bag this year.

Some have performed well, while other have dropped like rocks, leaving small investors feeling burned and swearing off of IPOs for good.

One 38-year-old office worker bought 8 million won ($7,074) of Auros Technology at the end of February. The company, which provides inspection systems for the semiconductor industry, listed on the Kosdaq on Feb. 24.

The stock popped by its daily limits on the first day, but is now down 30 percent, and the investor is kicking himself.

In the first half, 37 stocks came to market, four as Kospi stocks and the rest listing on the Kosdaq.

Most are above their IPO prices. A few are well underwater.

Giantstep, a Kosdaq-listed visual image production studio, is the top gainer. The metaverse play hit the daily limit day one and hasn’t looked back. It is up 403.6 percent from its IPO price.

Robotics company Rainbow Robotics is up 145.5 percent, and vaccine maker SK Bioscience 143.8 percent. Electric car battery material maker SK IE Technology, which listed as a Kospi company in May, is up 74.3 percent.

Investors in seven stocks are counting their losses.

Some stocks flew on listing only to drop. Six out of nine stocks that hit their limits on their first day of trading are trading below their starting prices.

“Gains from IPOs are not bad really, but if you take a closer look, there are quite a lot of companies with share price falls after listing,” a source from a brokerage said. “Considering the rise of stocks overall, the performance is not very good. In the first half, the Kospi was up 14.7 percent and Kosdaq 6.4 percent.”

Analysts warn investors should be able to distinguish jewels from pebbles when selecting where to invest, and be especially on the lookout for poorly priced IPOs.

Krafton lowered the price range for its planned initial public offering last week, from between 458,000 won and 557,000 won per share to between 400,000 won and 498,000 won after the Financial Supervisory Service (FSS) asked it to submit a corrective registration statement

While the FSS said “the statement submitted has not been prepared in conformity with the prescribed form for the statement,” there have been multiple local reports that the FSS is likely to have requested the game developer to clarify how it arrived at the offering price and provide evidence.

“As the IPO market overheats, IPO prices are being set at the upper end of the price range or even at higher prices,” said Kim Soo-yeon, an analyst from Hanwha Investment & Securities. “Higher the prices, the less the opportunity for gains.”

Investors should “look at the earnings outlooks and whether the IPOs are priced fairly,” said Hwang Sei-woon, a senior research fellow at the Korea Capital Market Institute.