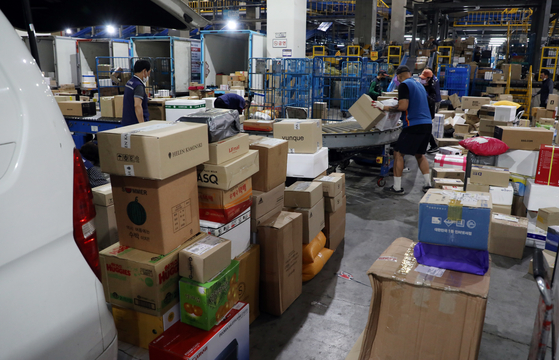 Koreans are receiving far more packages than they did before the pandemic, with the rate of parcel deliveries for the very young and the old jumping the most.

The Korea Transport Institute ran a survey last November asking participants how many deliveries they received per month before the outbreak of Covid-19 and how many they receive per month since.

Before the pandemic, respondents received an average of 6.2 parcels a month. This increased 57 percent to 9.7 parcels a month by November, they said.

“This seems to be the result of universities expanding online classes and a stronger tendency of elderly people to avoid risks by going out as they are more vulnerable to infections,” the report said.

The survey asked which items the respondents were receiving via parcel delivery.

The demand increase for books and home electronics parcels was relatively new, the report said, as it started to increase as social distancing rules dragged on.

“The widened scope of users’ age and product categories in the parcel service segment means that the ongoing increase of deliveries will be a mid-term trend,” the report said.

Another noticeable change was found in the way how people received their parcels: Before the pandemic, the number of people who received parcels in person and those who didn’t was largely 50 to 50. But after the Covid-19 spread, that portion shifted to 20 to 80.

Sixty-five percent of respondents said they would prefer receiving parcels without direct contact even after Covid-19 is over.