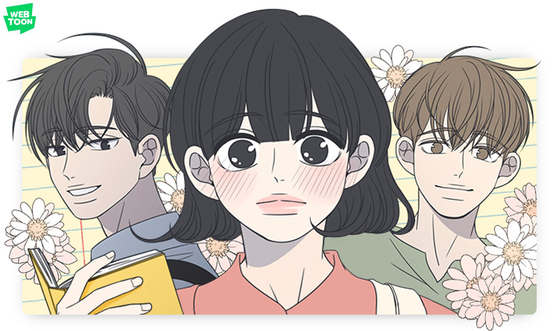 
For Korean high school students struggling with their studies, adults often try to comfort them with seemingly magical promises of what will happen to them once they enter a university — that they will lose weight, get prepared for a decent job right after graduation and, of course, pick up hot dates along the way. But it doesn't take long for them to realize that none of those things actually just fall into their lap and it all takes just as much time and effort as their studies. That’s what makes campus romance stories, such as “Romance 101,” all the more popular.

“Romance 101” is a rom-com Naver Webtoon series by Namsoo, which began in March 2018 and finished last month in Korea, with a few more epilogue episodes left to soothe readers' hearts. About 50 episodes have been uploaded in English, so it’s safe to say that there’s still a long way to go for global readers.

“Romance 101” revolves around 21-year-old university student Bareum who loves planning out her daily schedule, down to the nitty-gritty details — from exercising, studying, reading books, going shopping, taking classes at school, meeting with friends — and then planning everything again for the next day. And she completes every single item on the list to perfection. Her best friend Doeun gets a headache just by looking at Bareum’s planner, but Bareum loves the sense of satisfaction and fulfillment that comes from ticking off the boxes after each task.

But if there’s one thing that she just can’t seem to cross off from her to-do list, it’s getting a boyfriend. Having devoted her whole life to studying, Bareum has no idea how to flirt or start a relationship — so much so, that when she sees her crush, Jaehyeon, instead of asking him out on a date to the movies, she asks him whether he’s seen the latest film. But when he answers that he hasn’t, she tells him, “You should go and watch it.” 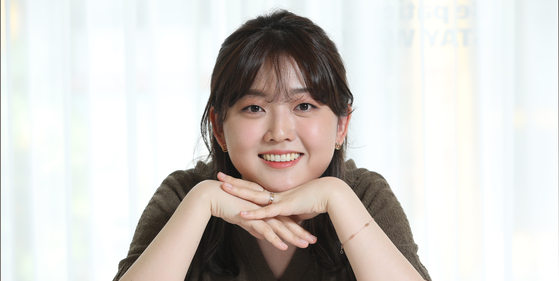 Webtoonist Namsoo, the author of Naver Webtoon series ″Romance 101,″ sits down for an interview with the Korea JoongAng Daily at a cafe in western Seoul. [PARK SANG-MOON]


“There’s a part of me in each character, and Bareum is no exception,” Namsoo told the Korea JoongAng Daily in an interview held at a cafe in western Seoul. “But one thing that was the hardest for me was that Bareum was supposed to be clueless about dating. But I’m nothing like that in real life! I had to take advice from my friends on how Bareum should act awkwardly.”

Bareum ends up joining a computer programming club at her school, after falling in love at first sight with Jaehyeon, who persuades her to join his newly-founded club. Instead of the kind and caring Jaehyeon, however, Bareum keeps running into Yuyeon, a “bad-tempered” friend of Jaehyeon, who turns out to be all bark and no bite. Jaehyeon’s family problems keep him from making time for Bareum, and she starts to develop an attachment to Yuyeon instead, who stands by her side during hard times. 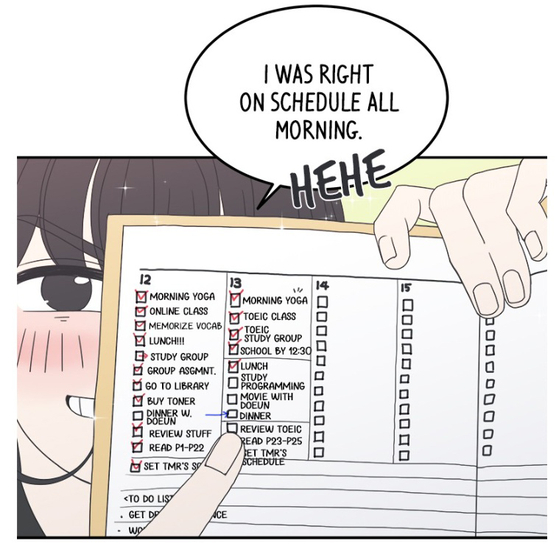 In a scene from Naver Webtoon series ″Romance 101″ by Namsoo, Bareum shows off her ultra-specific schedule for the day to her best friend Doeun. [NAVER WEBTOON]


“I’m grateful for all my readers and the fact that they were immersed so deeply in the story,” Namsoo said. “But I felt upset, because every character is precious to me. To see the comments talk badly about the characters made me feel sad. Many more fans rooted for Yuyeon than Jaehyeon, so Jaehyeon supporters would write things like, ‘Why do you keep hating Jaehyeon?’”

Some comments even asked the webtoonist whether she had made up her mind on who the boyfriend should be or whether she was just making things up as she went along. But Namsoo made it very clear that there was only one guy she had her mind set on from the start and that everything else in between was added to get the story going. But one thing that she didn’t add in was a villain or a conflict among characters purely for the sake of the story.

In “Romance 101,” all characters go through their share of woe, but none of them mean each other harm or purposely try to hurt each other. Their actions are a result of their personalities and their surroundings, and the times they come in conflict are all quite understandable in real life.

Bareum begins to question whether she’s going in the right direction in her life after seeing people at the programming club who are so passionate about the field, while her best friend Doeun questions her relationship with her longtime boyfriend. When they end up fighting, they realize it’s because they don’t want to burden each other. And when Jaehyeon and Yuyeon end up fighting, it’s also because they’re busy finding their own career paths and do not want to seem weak. 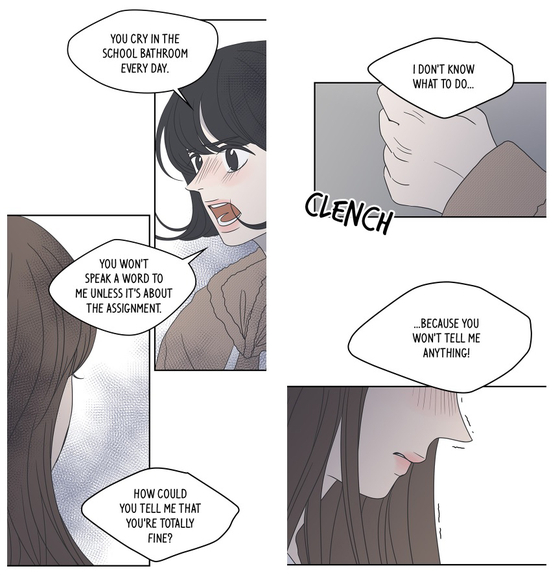 In a scene of Naver Webtoon series ″Romance 101″ by Namsoo, Bareum starts an argument with Doeun because Doeun doesn't want to burden Bareum with her complaints. [NAVER WEBTOON] 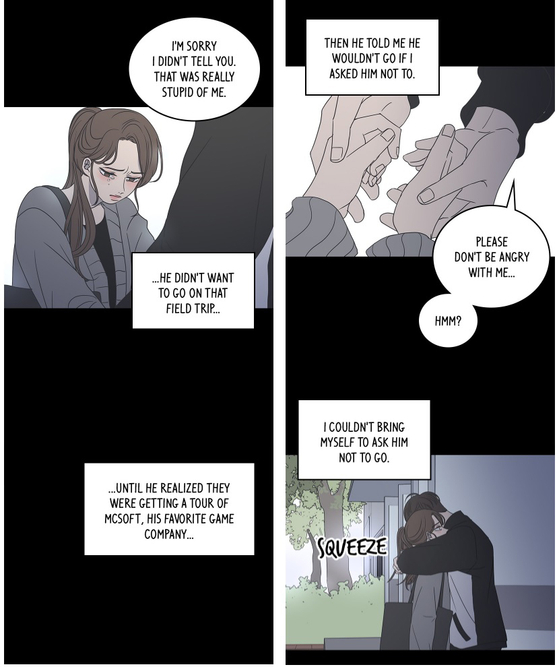 In a scene of Naver Webtoon series ″Romance 101″ by Namsoo, Doeun and her boyfriend have an argument because he is preoccupied with his school life. [NAVER WEBTOON]


This very lack of antagonism was Namsoo’s goal in her work, but, at the same time, it was also the element that made her work difficult. Not having a villain meant that the story had to flow quite subtly, which could easily feel flat, or even boring. At the same time, she didn’t want to go into too much detail about university students’ job-seeking hardships, lest it turn into a dry documentary.

“When I first started ‘Romance 101,’ I was determined to make it harmless for the readers,” Namsoo said. “I don’t mean to talk badly about other people’s works, but there are so many works out there that stress the readers out with hateful messages or violence, or scenes that intentionally touch on controversial issues. I wanted to make something that made readers feel good — hopeful, in a way. That did pose a great challenge to me, to come up with conflicts that weren’t too flat, but when readers sent me messages that ‘Romance 101’ gave them peace, I felt proud of the work that I had done.”

At the end, the characters each come to understand themselves and their friends and support each other in their decisions. They all make different choices based on their different personalities and situations. That’s the lesson of “Romance 101”: That there’s no one answer that suits everyone.

“It’s titled ‘Romance 101,’ but it isn't meant to teach anyone or give one particular message,” said Namsoo. “On the contrary, I hope that people see that everyone’s lives are different. You might see yourself in one character or more in another. Everyone lives their own lives in their own way, and that’s the kind of diversity that I wanted to talk about.” 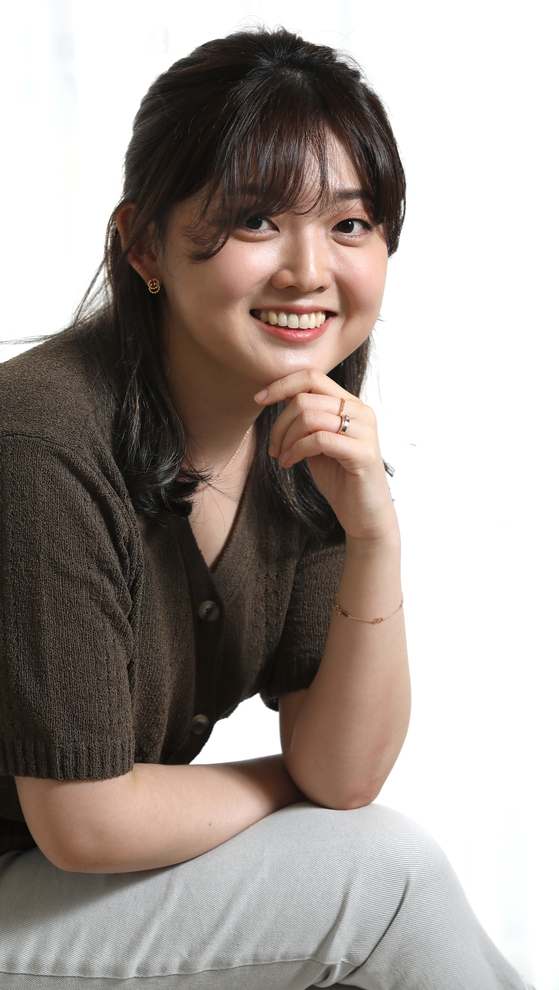 Webtoonist Namsoo, the author of Naver Webtoon series ″Romance 101,″ sits down for an interview with the Korea JoongAng Daily at a cafe in western Seoul. [PARK SANG-MOON]


“Romance 101” was Namsoo’s official debut work. She had dreamt of becoming a cartoonist since she was young, but a lack of confidence directed her to major in interior design and architecture. She’s still a little dazed that people actually like her work, but says that the success of “Romance 101” will be enough to keep her going as a webtoonist in the future.

“I think I’m going to keep drawing romance pieces; I’m just not sure what kind of romance,” Namsoo said. “There’s not just one kind of romance in the world, right? But I love the idea of love and expressing it as an author. I’ve been lucky enough to have fans from my amateur days, and that definitely helped ‘Romance 101’ too. I’m grateful for each and every reader. I tell them that I love them so often, because I do — I love them so much.”