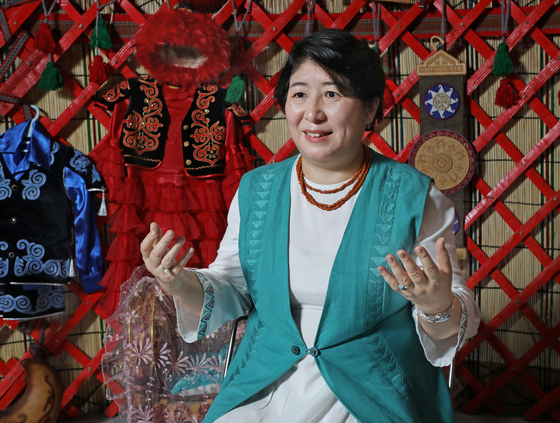 Dinara Kemelova, ambassador of the Kyrgyz Republic to Korea, speaks with the Korea JoongAng Daily at an exhibition on the country's tourism at Coex in southern Seoul on June 25. [PARK SANG-MOON]

Kyrgyzstan and Korea celebrate 30 years of cooperation next year

An ambassador’s to-do list can vary day-to-day, but at the end of the day, they boil down to a single concept, says Dinara Kemelova, ambassador of the Kyrgyz Republic to Korea.

“I am always looking for similarities between the two cultures,” Kemelova said, speaking to the Korea JoongAng Daily in a yurt, or what the Kyrgyz people called the boz uy, at an exhibition at Coex in southern Seoul, on June 25.

In her third year as ambassador of the Kyrgyz Republic to Korea, Kemelova says she found many characteristics common to the people of Korea and Kyrgyzstan, some of which are visible in what the people eat, how they do things and even how they think about things.

“Like Koreans, a lot of Kyrgyz people are open-minded, and we like to get things done in a fast pace,” said Kemelova. “When it comes to our cuisines, you have the mandu [dumplings in Korea], we have the manty. You have japchae [glass noodles stir-fried with vegetables], we have funchoza. Your galbitang [beef soup] is our shorpo,” she said. “We also feel connected by our respect for traditions and history, and by our respect for the elderly.”

Another common aspect shared between the two peoples, says Kemelova, is one that may not be visible immediately.

“We are two people who are not only similar in our looks, but also in our souls,” she said. “Korea and Kyrgyzstan share a spirit for freedom and independence that is visible in our histories.” 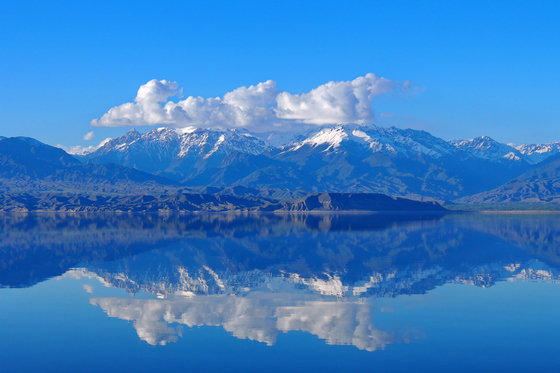 Kyrgyzstan, a Central Asian nation surrounded by China, Kazakhstan, Uzbekistan and Tajikistan, declared independence from the Soviet Union on Aug. 31, 1991. The next year, it established diplomatic relations with Korea.

Speaking to the Korea JoongAng Daily in the lead up to the 30th anniversary of the Independence Day of Kyrgyzstan, Kemelova highlighted historical events as well as more modern instances of the Kyrgyz Republic that speak for the nation’s spirit of independence, and where she thinks more work can be done on the front of Korea-Kyrgyzstan cooperation in the future as the two look to celebrating their three decades of friendship.

Every year, the Kyrgyz people celebrate the day with festive concerts and events including equestrian games and competitions in towns and villages. Special Independence Day events are scheduled at the Ala-Too Square in [the capital of] Bishkek, which include a speech by the president, and usually culminate with fireworks at night.

The Kyrgyz community in Korea, which consists of nearly 6,000 people, will also be celebrating the day here, although most of the events will be held virtually due to the Covid-19 restrictions. 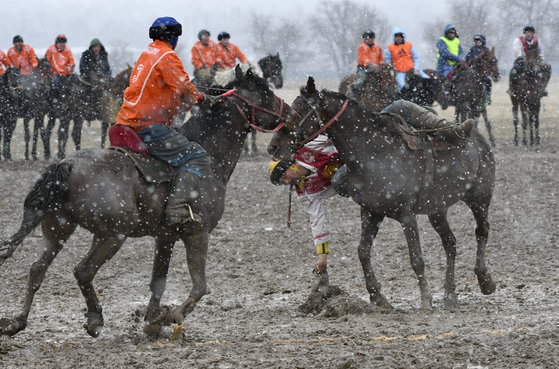 Riders compete during a kok boru, also called ulak tartysh, a traditional game in which players on horseback maneuver with a goat's carcass and score by putting it into the opponents' goal outside Sokuluk village, 12,5 miles west of Bishkek, Kyrgyzstan on March 30. [AP PHOTO/VLADIMIR VORONIN]

The history of fighting for independence in Kyrgyzstan actually dates back decades before 1991, including in the 1916 revolution during which many Kyrgyz diaspora moved to other parts of the region including China. Were there efforts to reconnect with the overseas Kyrgyz diaspora following the country’s independence?
In 1916, when the mass unrest of the Kyrgyz people against tsarist colonialism was suppressed, many families fled to neighboring countries — in particular, to China.

But you know, the Kyrgyz are one of the most ancient nations living in Central Asia. Also we are a nomadic people and have always lived in the vast expanses of Eurasia, wandering from one region to another. Although the main part of the Kyrgyz lives in the Ala-Too region, ethnic Kyrgyz have continued to live in foreign countries near and far for a long time.

It was only after Kyrgyzstan gained independence that ties with foreign ethnic Kyrgyz began to strengthen. In August 1992, the World Congress of the Kyrgyz was held in Bishkek. It was attended by Kyrgyz people from China, Uzbekistan, Turkey, Afghanistan, Tajikistan, European countries and even from distant Australia. 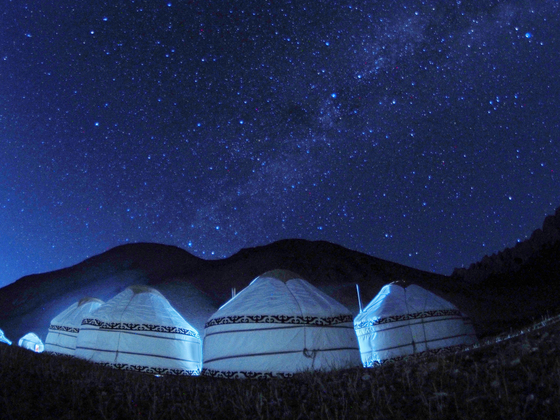 More recently in Kyrgyz history, leaders of the nation have been seen stepping down following public protests, usually over claims of falsities in elections. Would you say there has long been a high interest among the public in the country’s democratic processes?
We have had a number of such uprisings to prove that state power belongs to the people.

In January this year, early presidential elections were held in the country, in which the current President Sadyr Japarov won. In addition, two referendums were held on determining the form of government of the Kyrgyz Republic and on the draft of a new Constitution, which was adopted on May 5 this year.


In April, you were present in the meetings between Korea’s Assembly Speaker Park Byeong-seug and President Sadyr Japarov in Bishkek. What were some of the common objectives in bilateral ties the two agreed on?
It was the first time that the speaker of Korea’s National Assembly visited the Kyrgyz Republic. Speaker Park Byeong-seug held discussions with President Sadyr Japarov, Speaker of Parliament Talant Mamytov, Prime Minister Ulukbek Maripov and others.

The visit of the speaker has a great importance in terms of strengthening the political dialogue between two countries, especially this year, as Korea included Kyrgyzstan in the list of Priority Partner Countries. In this regard, the issues of expanding inter-parliamentary ties, increasing trade turnover between Kyrgyzstan and South Korea, joint investment projects, opening direct flights between Bishkek and Seoul, expanding Korea International Cooperation Agency [Koica]'s project activities in the Kyrgyz Republic, intensifying cooperation in the field of education and labor resources, as well as collaboration in health care, especially in the fight against Covid-19, were discussed. 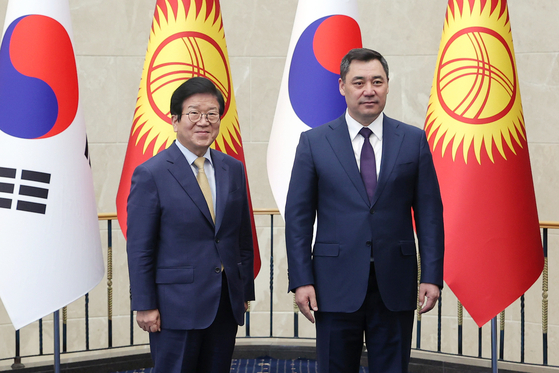 Korea and Kyrgyzstan will be celebrating their 30th anniversary of diplomatic ties next year. What areas are the two nations looking to cooperate on more?
I would like to start with the fact that Kyrgyzstan has huge energy potential, both in hydropower and renewable energy sources. Korean companies are conducting feasibility studies for several medium-sized hydroelectric power plants at the moment. Korean investors could also take part in the construction of infrastructure, transport logistics, smart cities, textiles, agriculture and green economy projects.

With the onset of the Covid-19 pandemic, Korean companies BS Group (Amsbio) and TTVenture opened a PCR laboratory at the Manas airport in Kyrgyzstan in May, which currently uses the latest equipment and reagents that have no analogues in Kyrgyzstan and the [Commonwealth of Independent States]. Korean investments and technologies together with the labor and natural resources of Kyrgyzstan can create synergies mutually beneficial to both nations.


As we are conducting the interview in a boz uy, could you tell us about the significance this traditional home holds in relation to the lifestyle and values of the Kyrgyz people?
The boz uy means “grey house” in Kyrgyz language. Kyrgyz people used to lead nomadic lives, and the boz uy came to be their home as it comes with a design that three people within a half an hour can assemble and disassemble with no hammer or nail.

When you visit Kyrgyzstan, you can stay in one of the boz uy in mountains or near beautiful lakes, such as the Issyk-Kul lake, which we call the “Pearl of Central Asia.” At nighttime, you will be amazed at the number of stars that fill the vault of the vast skies. These getaways will provide a tourist with a time of finding a peace and quiet in nature, away from all the buzz of the highly interconnected world today. 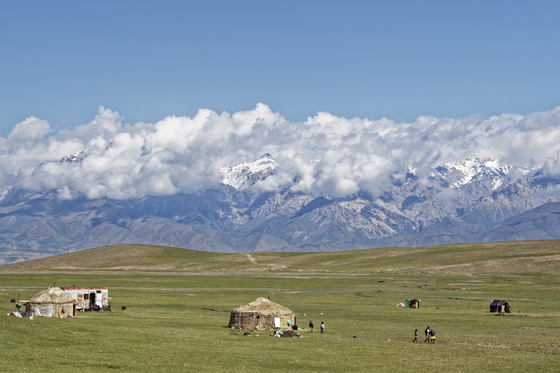 Currently, there are about 17,000 ethnic Koreans living in Kyrgyzstan, many of whose descendants are studying in Korea. In what ways do you see the younger generations of the two nations making connections?
The K-pop industry became popular in Kyrgyzstan several years ago. Our young people want to imitate Korean artists more and more. To do this, many independently study the Korean language, which, by the way, has also become a very popular foreign language for studying in Kyrgyzstan. We have around 8,000 students studying Korean. I hope that the Kyrgyz language will also become popular among Koreans. We are now working to attract volunteers to teach Kyrgyz to children in Korea. 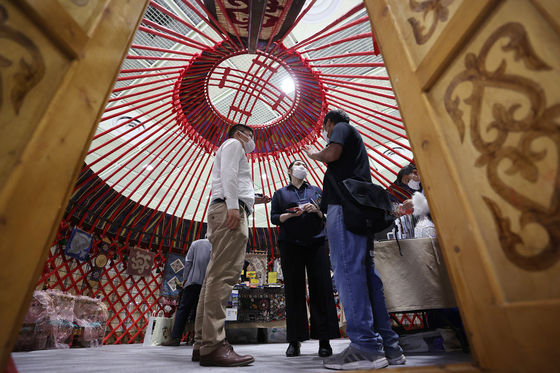 A traditional yurt, or boz uy, of the Kyrgyz Republic showcased at an exhibition in Coex in southern Seoul on June 24. [YONHAP]