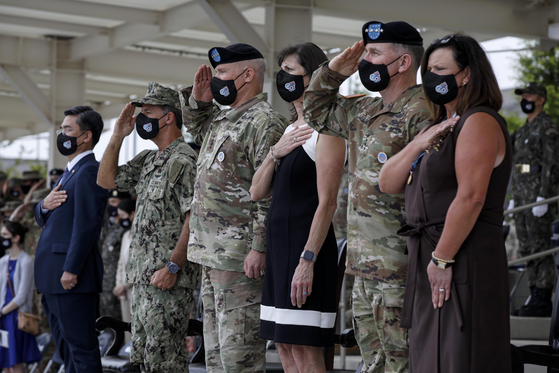 LaCamera replaced Gen. Robert Abrams as head of the USFK, Combined Forces Command and the United Nations Command in a change-of-command ceremony Friday at Camp Humphreys in Pyeongtaek, Gyeonggi, attended by Suh and Adm. John Aquilino, chief of the U.S. Indo-Pacific Command.

In a meeting Monday to review the progress of Opcon, Suh called for consultations between top USFK officials, including its new commander, and the two countries’ defense and military authorities to accelerate the Opcon transfer “based on the firm Korea-U.S. alliance,” according to Seoul’s Ministry of National Defense.

The Defense Ministry said that the participants of the Opcon meeting “shared the view that all military-level efforts should be united so that the conditional Opcon transition can be carried out at the appropriate time, while firmly maintaining the alliance's combined defense posture.”

The top military officials also “reaffirmed the South Korean government and military’s commitment to the transfer of Opcon” and further reviewed and evaluated the “the South Korean military’s securing of core military capabilities and the alliance's ability to respond to North Korea’s nuclear and missile threats."

Suh told the meeting that advancing the Opcon transition “is a key national task of our government,” and also “an essential task to achieve responsible national defense.”

President Moon Jae-in asked LaCamera to pay attention to such pending alliance issues as the transition of wartime Opcon and the return of the land used by the U.S. Army's base in Yongsan District, central Seoul, during a luncheon at the Blue House last Thursday.

The Moon administration initially hoped for Korea to regain Opcon from the United States by the end of the president's five-year term in May 2022, but that goal has been obscured because of delays in an assessment process due to the Covid-19 pandemic.

Moon relayed to the new USFK commander that he had “high expectations” from LaCamera because of his experience dealing with the security situation on the Korean Peninsula.

LaCamera, a 57-year-old four-star general, previously served as commander of U.S. Army troops in the Pacific. He mentioned to Moon his experience serving near the demilitarized zone (DMZ) in the 1990s.

On the Opcon transfer, LaCamera stressed it should be "conditions-based" and warned against a “time-based approach to this important endeavor.”

South Korea handed over operational control of its troops to the United Nations Command led by the United States during the 1950-53 Korean War and regained peacetime Opcon in 1994.

In 2018, Korea and the United States agreed to kick off a three-step assessment of the Korean military needed to gauge Seoul’s readiness to regain wartime Opcon. The first stage, concerning initial operational capability (IOC), was completed in 2019, while the second phase — assessment of full operational capability (FOC) — was set for last year, but has faced delays. The full mission capability (FMC) would be the final step to enable the Opcon transfer.

A Defense Ministry spokesman Monday confirmed that discussions are underway with Washington on the FOC test for the Opcon transition.

The ministry added that Seoul and Washington are in discussions over the timing and scale of their annual summertime military exercise usually held in August.

“Our alliance forged in blood in the crucible of the Korean War has been the bedrock of peace and stability on the Korean peninsula for more than 70 years,” LaCamera said in his inaugural ceremony Friday. “I look forward to us getting together in the true spirit of one team to strengthen our alliance, and propel it to even greater heights.”

Koreans affiliated with USFK are first in nation to get vaccines