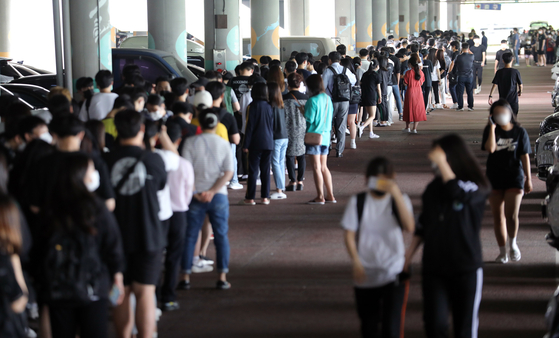 
The total number of Delta variant patients reached 416 in Korea, as health authorities raised their guard against the more contagious strain of the coronavirus.

"As of Sunday, 416 people have been confirmed with the Delta variant, with more cases added from mass infections within the community,” Jeong Eun-kyeong, commissioner of the Korea Disease Control and Prevention Agency (KDCA), said during a briefing on Monday.

Health authorities have been updating the numbers for variant cases once a week on Tuesdays. Last Tuesday, a total of 263 people had been infected with the Delta variant. That shows that the number increased by more than 150 people in less than a week.

The Delta variant was found in nine people in a cluster of infections tied to foreign teachers at English-language hagwon (cram schools) in several schools in Gyeonggi cities.

The number of coronavirus patients related to this cluster reached more than 307 as of Monday, adding fears that more Delta patients could be found.

Jeong stressed, though, that the Delta detection rate is especially high among imported cases.

“The rate of fully vaccinated people [in Korea] remains low at around 10 percent, so it is extremely important to complete vaccinations while suppressing the inflow of the Delta variant as much as possible, as well as expanding the inoculation of first shots as much as possible.”

Sohn Young-rae, a senior health official from the Central Disaster and Safety Countermeasure Headquarters, also warned that the Delta variant is “rapidly increasing” in Korea.

"The Delta variant is detected in around seven out of 100 new Covid-19 patients," Sohn said in an interview with TBS radio on Monday.

“The Delta variant accounted for less than 1 percent two months ago, but it has increased up to 7 percent now," he said.

The Delta variant, common in India, is believed to have 1.6 times higher transmission power than the Alpha variant.

The proportion of Delta out of the four virus variants — Alpha, Beta, Gamma and Delta — increased from 7.3 percent in April to 12.8 percent in May, and 18.2 percent last month.

A total of 2,492 cases of new virus variants were confirmed in Korea as of last Monday — with 2,075 people have been infected with the Alpha variant, followed by 263 with the Delta variant, 143 with the Beta variant and 11 with the Gamma variant.

To fight against a recent spike in Covid cases, including the highly transmissible Delta variant, health authorities announced strengthened preventive measures to be applied especially in the greater capital area, home to half of the country’s 51 million population.

All passengers coming from Indonesia, where the Delta variant is spreading, must present a negative Covid-19 polymerase chain reaction (PCR) test result to board flights to Korea, effective from Sunday, July 4. This includes Koreans as well.


The number of Covid-19 confirmed cases among travelers from Indonesia came to 240 in the past four weeks, including 132 Korean nationals.

Health authorities earlier added India and Indonesia to a list of countries for which quarantines will be mandatory, even if the travelers are fully vaccinated. 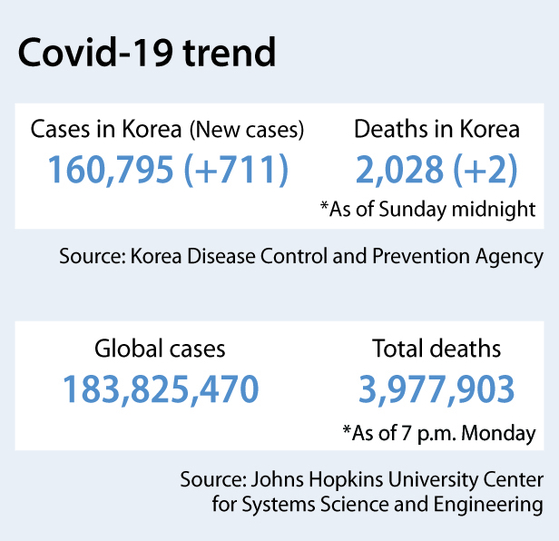 Korea's daily new virus cases stayed in the 700s for the third day in a row on Monday, the highest number of cases reported on a Monday since the peak of the third wave of Covid-19 in January. Virus figures on Mondays are usually lower due to fewer tests conducted over the weekend.

Last week, average daily Covid-19 cases in Korea increased by more than 30 percent compared to the week before, and most patients were people in their 20s in the Seoul metropolitan area.

The KDCA said the daily average of local infections last week was 655, up 33.2 percent from a week earlier.

With more than 80 percent of new infections coming from Seoul, Gyeonggi and Incheon, patients in their 20s and 30s have been on a steep rise.

“The number of patients in the metropolitan area is increasing rapidly, especially those in their 20s and 30s,” the KDCA commissioner said.