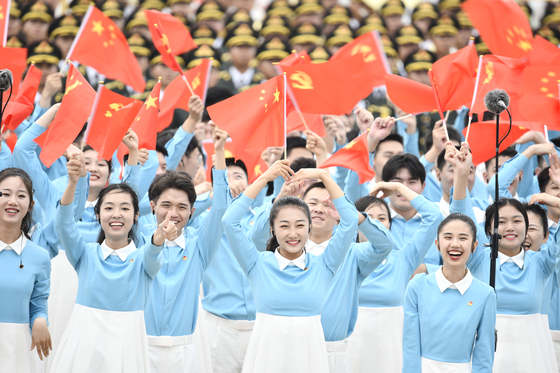 Young Chinese people celebrate the centenary of the Communist Party of China at Tiananmen Square in Beijing on July 1. [XINHUA/YONHAP]

YOU SANG-CHUL
The author is the head of the China Institute at the JoongAng Ilbo.


Buoyed by the “angry youth,” China is not likely to stay quiet as the West criticize China’s human rights conditions. China is using a new tactic to address the West’s “original sins.” China is exposing wrongdoing caused by the colonial expansion of the West and holding them accountable. On June 22, China and Canada had an argument at the UN Human Rights Commission. China addressed the case of 215 children’s remains discovered at the site of a boarding school for indigenous people in late May.


Canada operated some 130 boarding schools for indigenous people from 1874 to 1966, and more than 4,000 children died from abuse and other causes. The remains of 215 children, included a three-year-old, were discovered. An investigation is in progress to find how and when the children died. China argues that Canada’s ethnic cleansing must be independently investigated by an international community.


Two days later, Deputy Chinese Permanent Representative to the United Nations Geng Shuang declared China’s firm support for Argentina’s demand of sovereignty of the Malvinas Islands. The Malvinas Islands, also known as the, Falkland Islands, are where the UK and Argentina had a territorial dispute and engaged in a war in 1982. It is the first time that a high-level Chinese diplomat officially has announced support for Argentina.


China has changed, and it began at the end of last year. The Australian government stated in a report that the Australian soldiers sent to Afghanistan killed 39 hostages and civilians between 2009 and 2013. Then, China drew and posted a picture of an Australian soldier with a knife against the neck of an Afghan child holding a lamb. China has been countering the Western offensive on human rights by exposing the original sins of the West.


The Chagos Archipelago in the Indian Ocean — the last British colony — is also the target of China. Britain separated the Chagos Islands from Mauritius in 1965 and lent the largest island Diego Garcia to the U.S. as a military base. The UN passed a proposal to have the UK return the islands to Mauritius, but Britain hasn’t followed. It is good material for China. In fact, the U.S. base is an issue for China, as it is close enough to be used to watch China. Surely, China will raise its voice, calling on the UK government to return Chagos Islands to Mauritius.


As China plans to sell supersonic fighters, armored vehicles and infantry weapons to Argentina, it is likely to face strong opposition from Britain. The move could break the military balance in the Falklands. China advocates a “peaceful rise,” but its behavior raises suspicions that it may be instigating war.

China the West the UK