Neither disc herniation nor paralysis can stop AF Cain

Neither disc herniation nor paralysis can stop AF Cain 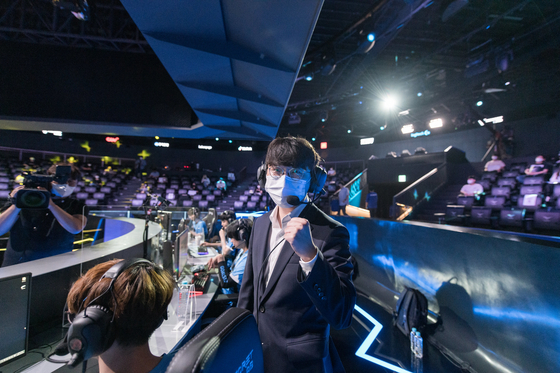 Afreeca Freecs head coach Jang ″Cain″ Nu-ri holds a pose for the cameras while his team sets up on stage. [RIOT GAMES]


Afreeca Freecs head coach Jang "Cain" Nu-ri looked remarkably weary as he entered the press zone last Saturday, after his team took their fifth win of the split with a hard-fought 2-1 victory over T1.

One might have attributed it to simple fatigue. The best-of-three had gone on for three hours, after all — much longer than usual, even by League of Legends Champions Korea (LCK) standards.

If only it were as simple as that.

"During my last year in America, I was diagnosed with spinal disc herniation," Cain told the Korea JoongAng Daily. "While I was there, I managed with continuous treatment, but when we got to China for Worlds, the hernia recurred. It was so bad that I couldn't even walk to the arena."

After the tournament, he left Team Liquid — which he had coached for nearly four years, setting new records in the process by winning four consecutive domestic titles — to focus wholly on treatment and recovery. The plan was to get back to health in his home country with some rehabilitation exercise and a lot of much-needed rest. But then another issue surfaced.

"Facial palsy," he said. "I couldn't move the right side of my face."

He was shocked and worried at first, wondering how severely the additional development might affect his personal and professional life. Soon enough, though, he learned that it wasn't too rare an illness and that symptoms tend to recede over time, according to what he heard from doctors and physiotherapists.

Cain's condition eventually improved enough to let him start looking for work again, which of course he soon found, given his highly decorated coaching career. His medical woes are still very much ongoing, however.

"Even now, symptoms return when I'm stressed out or lacking sleep. There's a little bit of a twitch going on right now, actually," he said, pointing to his right eye in mild annoyance.

Fortunately, his health conditions have seemingly done no harm to his abilities as a coach, considering how much and how quickly Afreeca Freecs have improved since he took over the reins this summer.

With his patented approach of positive encouragement — "which happens to work well with my palsy, which is [vulnerable to] stress," he cheerfully offered — he has quickly brought together the previously fragmented squad and is turning them into a legitimate title contender.

Cain wanted to clarify that the project is still a work in progress, though.

"Our squad suffered a mental collapse after the match against Gen.G, and the following week's practice sessions were really tough for everyone," he shared.

"Still, suffering a downturn over the course of a season is inevitable. Things can't always stay great forever. The team is being built from the ground up again. Today's match against T1 was really important in that regard, and I was very glad and relieved that our players won by staying focused until the end."

This summer split is shaping up to be anybody's race, with leaders Gen.G being dominant but nowhere near infallible, and all the others — save the winless DRX — looking relatively neck-and-neck in terms of strength.

If Afreeca end up qualifying for this year's Worlds after their disastrous ninth-place finish in spring, it would be one of Cain's greater achievements as a head coach to date.

It might also offer some encouragement for any fellow patients watching.

"I'd like to reassure others with my condition, or something similar, that it'll be okay, that they shouldn't worry too much, that they'll still be able to do great," he said. "That being said, though, I hope fans keep in mind — health always comes first."