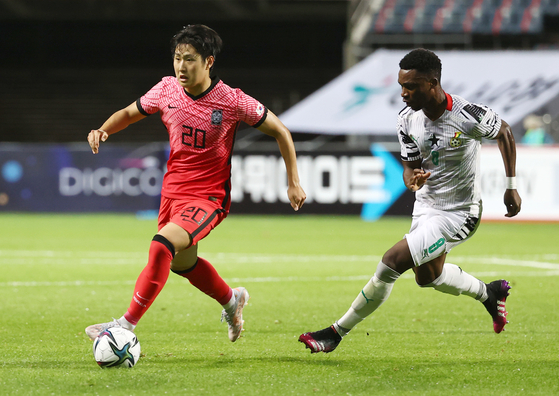 
The 22 men that will carry Korea's dream of Olympic football glory to Tokyo were finalized on Friday, when U-23 head coach Kim Hak-bum added four more names to the 18-player list announced earlier in the week.

Kim originally announced an 18-man roster for the 2020 Tokyo Games on Wednesday, adding four more names on Friday after FIFA expanded the entry to 22.

Typically, teams are allowed to name four reserve players that can only be used if a player is injured. Under the normal system, once an injured player is replaced the change is permanent and they cannot rejoin the roster. 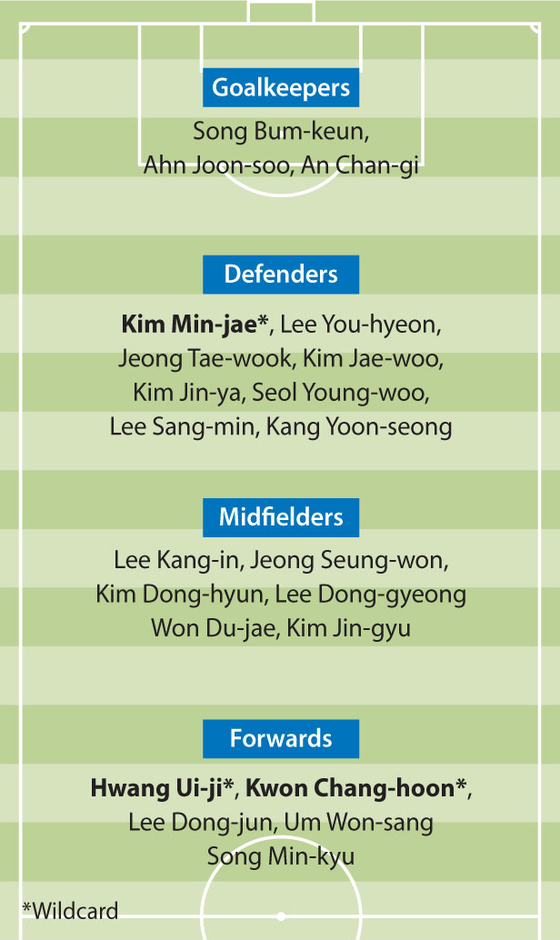 FIFA has changed the rules for the 2020 Tokyo Games, making those four reserve players additional members of the squad, allowing teams to choose whether to include them in the 18-man roster for each game or not. Changes will not be permanent, but 18 players do have to be picked ahead of each game, with four alternates left out of the lineup each time.

“The number of athletes on the start list will therefore remain at 18, but teams will now have the total of 22 players — 18 Athletes plus 4 Alternate Athletes — to select their team from for every match," FIFA said in a statement. "The [International Olympic Committee] has also remarked that this is an exception for the Tokyo 2020 Games and does not create a precedent for future Olympic Games."

An is the third goalkeeper added to the team, alongside Song Bum-keun of Jeonbuk Hyundai Motors and Ahn Joon-soo of Busan. Song will likely be the first pick in goal, with significantly more experience than the others, both with Jeonbuk and also with the U-23 team, with whom he has made 18 appearances. 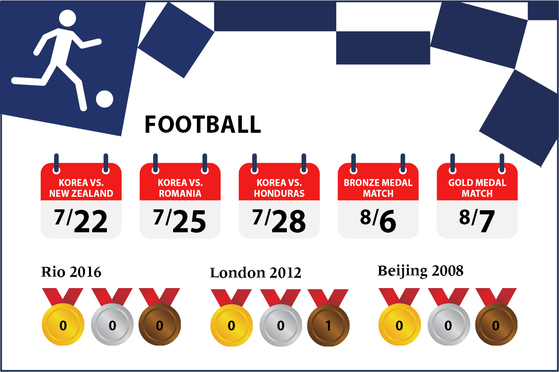 Kim has 32 caps for the senior Korean men’s team and has appeared for the U-23 team eight times, including at the 2018 Asian Games, where he earned a military exemption. Kim’s international performance has gained him a lot of attention, earning him the nickname The Monster for his ferocious defense during the 2017 Asian qualifier for the 2018 Russia World Cup.

The KFA is still seeking Beijing's permission to take Kim to the Games. Unlike other FIFA events, clubs are not required to release players for the Olympics.

Lee Kang-in, aged 20, is expected to emerge as one of the stars of the U-23 team in Tokyo. Despite his offensive prowess and position with a top-flight European club, Lee has only made one appearance with the U-23 team. He previously played for the U-20 squad, leading the team to a historic runner-up finish at the 2019 U-20 World Cup, where he won the Golden Ball.

In attack, Lee Dong-jun of Ulsan, Um Won-sang of Gwangju FC and Song Min-kyu of Pohang Steelers are joined by Korea's other two wildcards, Kwon Chang-hoon of the Bluewings and Hwang Ui-jo of Bordeaux.

Kwon, who joined the Suwon Samsung Bluewings after an international career in Germany and France, is the only wildcard from the local league. He generally plays as an attacking midfielder, but it looks like Kim Hak-bum wants him to focus on bolstering Korea's offense alongside Bordeaux forward Hwang.

Hwang is returning for wildcard for a second time, having also been called up to the U-23 team for the 2018 Asian Games. He ended the Asiad as the tournament's top goal scorer, with nine goals.

The notable exclusion from the wildcard entry is Tottenham Hotspur forward and national team captain Son Heung-min, who wasn't called up to the team, reportedly despite Spurs being willing to release him for the Olympics. Kim Hak-bum has not discussed Son's exclusion.

The U-23 team have two friendlies scheduled before the 2020 Tokyo Olympics begin, against Argentina at 7:30 p.m. on July 13 at Yongin Mireu Stadium in Yongin, Gyeonggi, and against France at 8 p.m. on July 16 at Seoul World Cup Stadium in Mapo District, western Seoul.

Both teams are likely to put up considerable opposition. Argentina is the third winningest country in Olympic football history, with two gold and two silver medals. France trails tied for 12th with one gold and one silver, while Korea is tied at No. 28 with a single bronze medal.

This year, Korea ought to have an easy path to the knockout stage at the Tokyo Games, having been drawn in Group B alongside New Zealand, Honduras and Romania. They will play their first match on July 22 against New Zealand.