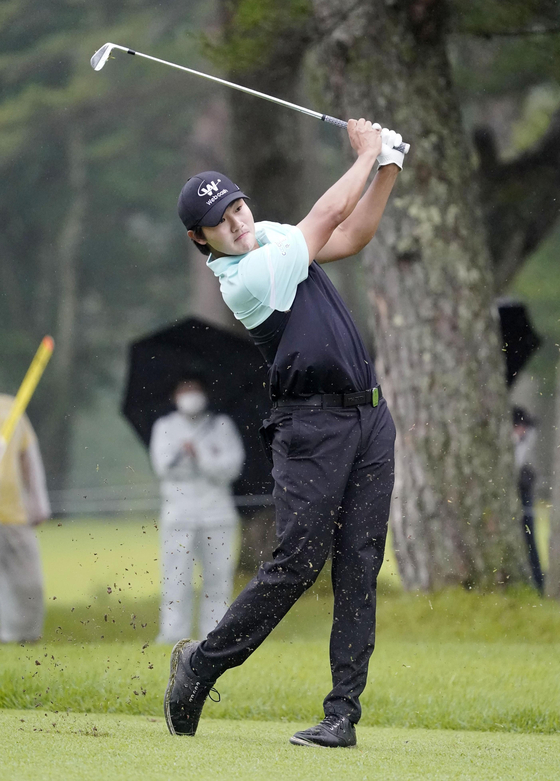 Kim Seong-hyun hits his iron on Sunday at the Japan PGA Championship that was held at the Nikko Country Club in Nikko, Japan from Thursday to Sunday. [YONHAP]

This is Kim's first victory since joining the Japanese Tour in 2019.

Kim had a good start with a bogeyless first round. He shot five birdies and was tied at runner-up with four other golfers. In the second round, he shot three bogies and four birdies, tying for seventh.

Kim came back in the third round, when he shot five birdies and one bogey to pull himself up to third place, two shots behind the leader Ikeda and one shot behind the runner-up Inamori.

The three went in to the final round just one shot apart, but on the first hole, Inamori caught up with leader Ikeda. Kim also caught up right away on the par-4 fourth and the three were tied at first with 12-under-par.

Ikeda once again attempted to outscore the other two on the par-5 ninth with a birdie, but bogeyed on the par-4 11th to tie with Kim and Inamori once again.

Yuki took a brief lead on the par-5 13th with a birdie, but Kim caught up on the par-4 14th, and as Ikeda shot a birdie on the par-4 15th, the three found themselves tied for the third time with 13-under-par.

Twenty-two-year-old Kim kept his calm amidst the tense competition, managing to par the par-4 17th while Ikeda slipped, bogeying the hole.

Inamori and Kim went into the last hole tied at first. Just when it seemed the competition would be prolonged to a sudden death playoff, Inamori missed his par putt, bogeying the par-4 18th and handing Kim his first victory on the Japan Tour.

Kim won the KPGA Championship at A-one Country Club in Yangsan, southern Gyeongsang in July last year. Not only did Kim win one of the two oldest and most prestigious events on the KPGA Tour, but he was also the first person ever to do so without a Korean Tour seed.

Kim now holds the national championship title in both Korea and Japan. He is the third Korean golfer to have won the Japan PGA Championship, after Kim Hyung-sung who won in 2013 and Hur Suk-ho who defended his 2004 title in 2005.