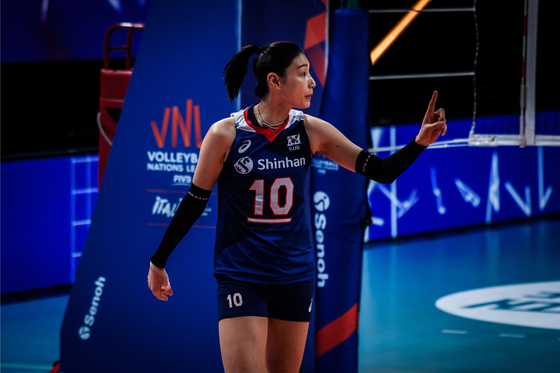 
Volleyball coach Stefano Lavarini announced his final entry for the 2020 Tokyo Olympics on Monday, naming the 11 players that will join national talisman Kim Yeon-koung in Japan later this month.

According to the Korean Volleyball Association on Monday, Kim will be joined by Lee So-young, Pyo Seung-joo and Park Jeong-ah on the left, with Kim Hee-jin and Jeong Ji-yun on the right. Yang Hyo-jin, Park Eun-jin and Kim Su-ji were named as centers.

The setters heading to Tokyo are Yeom Hye-seon and An Hye-jin, with Oh Ji-young as the team's libero.

Kim Yeon-koung, Yang Hyo-jin and Kim Hee-jin will all be competing in their third consecutive Olympics, having both been in the squad at London 2012 and Rio 2016.

While announcing the team, Lavarini stressed that players were selected based on how well they would fit together as a single unit, adding that the selection should not be viewed as a negative opinion of any other national team contenders.

The twelve countries competing in the women's event in Tokyo are divided into two pools. Korea is in Pool A alongside Japan, Serbia, Brazil, the Dominican Republic and Kenya. Pool B consists of China, the United States, Russia, Italy, Argentina and Turkey.

Korea will need to finish the preliminaries within the top four to advance to the quarterfinals.

Korea will begin its Olympics with a game against Brazil at 7:40 p.m. on July 25.