Stocks rise to record high ahead of earnings reports

Stocks rise to record high ahead of earnings reports 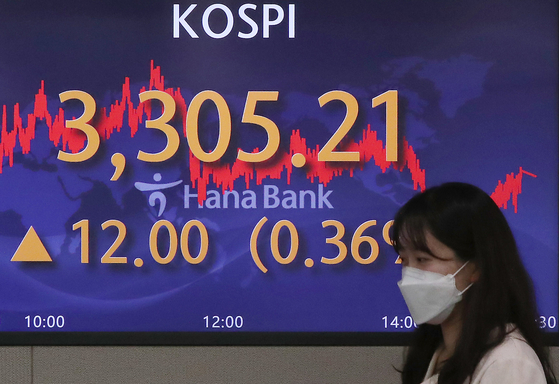 A screen in Hana Bank's trading room in central Seoul shows the Kospi closing at 3,305.21 points on Tuesday, up 12 points, or 0.36 percent, from the previous trading day. [NEWS1]


Stocks advanced for the second consecutive day to close at a fresh record Tuesday as hopes for strong second-quarter corporate earnings drove up tech stocks. The won rose against the dollar.

Trading volume was moderate at about 1 billion shares worth some 14.5 trillion won ($12.8 billion), with gainers outnumbering losers 476 to 344.

After a strong start, local stocks advanced on expectations of robust corporate earnings in the April-June period, despite concerns about the new coronavirus variant.

Korea's daily new virus cases stayed in the 700s for the fourth day in a row Tuesday, prompting authorities to consider maintaining their distancing rules in the heavily populated greater Seoul.

The local currency closed at 1,129.7 won against the dollar, down 2.1 won from the previous session's close.