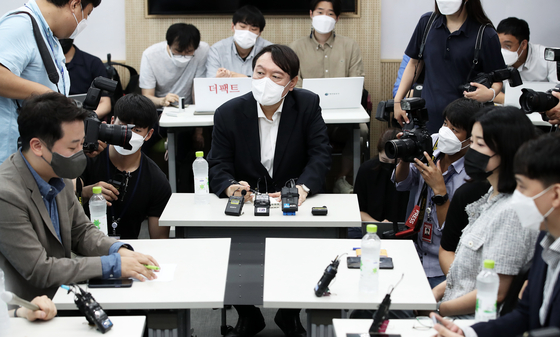 
Former Prosecutor General Yoon Seok-youl said he would reverse the Moon Jae-in administration’s nuclear phase-out policy, stressing that he left the prosecution due to political obstruction of his probe into the premature shutting down of the country's second-oldest nuclear reactor in 2018.

For two days in a row, Yoon organized events designed to trash Moon’s policy to reduce Korea's use of nuclear energy. On Monday, he had a meeting with Joo Han-gyu, professor of nuclear system engineering at Seoul National University, who is a critic of Moon’s policy.

On Tuesday, Yoon visited engineering college Kaist in Daejeon and met with nuclear engineering students critical of the policy.

“The nuclear phase-out policy was a poorly and hastily crafted one, and it must be revised,” Yoon said in Monday's meeting with Professor Joo. “Nuclear plants produce low-cost, environmentally-friendly energy. Energy policy is an incredibly important matter that concerns national security, the economy and our daily lives. I am skeptical of whether the nuclear phase-out policy was pushed forward based on a public consensus and social agreement.”

When Yoon held a press conference on June 29 to declare his presidential bid, he attacked the policy. “The nuclear phase-out policy ignored laws and killed the world’s most-advanced technology,” Yoon said.

Joo said he was delighted that Yoon addressed the issue in his presidential bid. “You have chosen the right words,” Joo said.

In 2017, Moon announced that the country would halt plans to build new nuclear plants and would not extend the lifespans of existing ones in a bid to phase out nuclear power. The government promised to increase the use of renewables to 20 percent of the country’s total power generation by 2030. By 2079, the country will have no operating nuclear plant, the government has said.

Moon has been anti-nuclear energy since the accident in 2011 at the Fukushima Daiichi nuclear plant, which had a big environmental impact on Korean air and water. His first nuclear phase-out pledge was made in 2012 when he unsuccessfully ran for the presidency, and he renewed the pledge again in 2017.

Yoon told reporters Monday that he decided to quit the prosecutor general post because of the administration’s political attacks triggered by his approval of an investigation into the suspicion that the government had broken the law when it decided to shut down the Wolsong-1 nuclear reactor in 2018.

The Korea Hydro and Nuclear Power (KHNP) abruptly made a decision in June 2018 to shut down the reactor, whose lifespan was extended through November 2022. Opposition politicians said the state-run energy company made a political decision to accommodate Moon’s nuclear phase-out policy.

“The Wolsong nuclear reactor probe is directly related to my resignation,” Yoon said Monday. “As soon as I ordered the Daejeon District Prosecutors’ Office to conduct raids to investigate the suspicion that the reactor was shut down earlier than scheduled due to an assessment that deliberately underestimated the economic advantages of keeping it going, a disciplinary process against me started. There were also enormous pressures on how we handled the case.”

Last December, Yoon faced an unprecedented order from Justice Minister Choo Mi-ae, suspending him for alleged breach of political neutrality and illegal surveillance of judges. The suspension was lifted by a local administrative court later that month.

While the Daejeon District Prosecutors’ Office continued with the probe, Yoon stepped down last March. At the time, he said he was stepping down to protest Moon’s campaign to weaken the state prosecution service.

Yoon said the government’s attempt to completely take away from the prosecution any remaining investigative powers started after prosecutors sought a warrant to arrest former Minister of Trade, Industry and Energy Paik Un-gyu. The prosecution's request for the warrant was rejected by a local court in February.

“I thought I could not stay there anymore, and my participation in politics is not unrelated to the Wolsong probe and the nuclear phase-out policy of this administration,” Yoon said.

Last week, the Daejeon District Prosecutors' Office charged Paik and former presidential secretary for industrial policy Chae Hee-bong with abuse of power in the premature shutting down of  Wolsong-1 and obstructing the business of the KHNP. Chung Jae-hoon, president of the KHNP, was indicted on charges of breach of trust and obstruction of business.

In his meeting with the nuclear engineering students at Kaist on Tuesday, Yoon continued to criticize Moon’s nuclear phase-out policy.

“It was a problem that the energy policy, which required a long-term review and national consensus, was decided abruptly,” Yoon said. “The hasty and unreasonable nuclear phase-out policy must be changed.”

Yoon also said it is a critical problem that the country is losing its competitiveness in the building of nuclear plants, stressing that once it is lost, it cannot be restored.