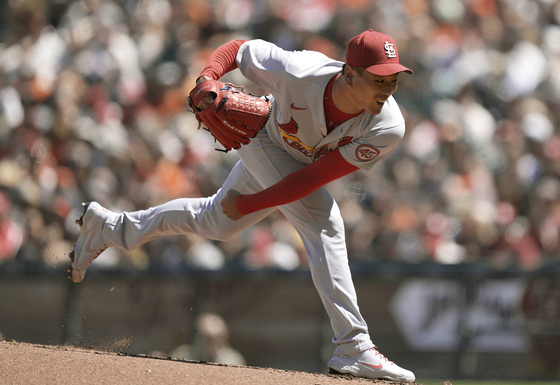 Kim Kwang-hyun of the St. Louis Cardinals pitches against the San Francisco Giants in the bottom of the first inning at Oracle Park in San Francisco on Monday. [AFP/YONHAP]


Kim Kwang-hyun of the St. Louis Cardinals has definitely snapped his cold streak, picking up his third win of the season with a dominant performance against a strong San Francisco Giants on Monday.

Kim had a rough start to the season, picking up a single W in his second game before going on a 10-game no-win streak, a painful run that he only snapped last Wednesday.

Yet despite the lack of wins, Kim's performance hasn't been especially bad, with his only quality start of the year coming in a no-decision. What Kim often lacked was run support from the Cardinals' lineup.

On Monday that wasn't a problem. Kim threw a dominant seven shutout innings, tying his own record for the longest outing of his major league career, giving up just three hits and two walks with two strikeouts.

The Cards were also shut down for six innings by opposing pitcher Kevin Gausman, but came alive in the seventh to take the lead. Both teams added RBIs in the last two innings with relievers on the mound, but Kim had already done enough and the Cards stayed ahead to take the game 5-3.

With only two strikeouts throughout the game, Kim was happy to rely on his defense to get the job done. The first inning saw exactly this approach play out: Two quick groundouts followed by a single and a lineout.

The second was more of the same: A groundout, a single and then a double play to end the inning. Kim started throwing strikeouts in the third, again allowing a single hit alongside a pop out and two strikeouts.

There was a moment of concern in the fourth, when Kim started limping after giving up a one out walk to Darin Ruf. The Korean southpaw appeared to be in enough pain at that point that manager Mike Shildt later said he was quickly trying to put together a plan to finish the game without the starter. Luckily Kim had just caught a spike in the dirt, and recovered quickly to throw a flyout and a groundout to finish the inning.

After that shaky inning, Kim quickly doubled down to dominate the next few. The fifth was a complete shutout, with Kim throwing three groundouts on six pitches to retire the side. The sixth was the same, with two groundouts and a flyout to end the inning.

While Kim had kept the Giants off the scoreboard throughout the first six innings, Gausman had gone one further with a no-hitter on the cards. Luckily for Kim, the Cardinals' bats woke up in the seventh.

Kim's last trip to the mound came with a 2-0 lead. He gave up a single walk before getting three quick outs to end the inning. He was replaced in the eighth by Giovanni Gallegos.

Monday's win follows a 7-4 victory over the Arizona Diamondbacks last week. Before that game, Kim hadn't picked up a win since April 23. He now carries a 2-5 line as the season nears the halfway point.

Kim spent some time on the injured list earlier in the month but appears to have recovered, although his ERA in June shows a significant drop off compared to previous months.