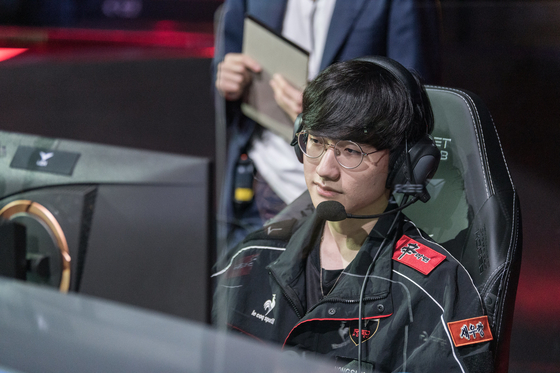 
After Nongshim RedForce's 2-1 victory over DWG KIA last Friday, veteran jungler Han "Peanut" Wang-ho sat down with the Korea JoongAng Daily to discuss his thoughts on Nongshim's current level of play, Upcomer's international power rankings and how far away retirement seems to be.

Following are edited excerpts from the video interview, the full version of which can be found on the Korea JoongAng Daily YouTube channel.


Q. Are thoughts of potentially winning the split coming to mind now?

A. I'm hungry for the title, of course, especially since the playoff format has changed. The regular-season first place no longer seeds into the finals. Gen.G will finish first, judging from how things are going, although nothing's for certain. So we're aiming to finish in second place.


Q. Have you heard that Nongshim made it into the top 10 for the first time on Upcomer's international power rankings? What are your thoughts?

A. I've seen it, but to be honest, I've always thought of power rankings just as an element of fun. I'm absolutely certain we're not top 10 in the world yet.


Q. Before this split started, very few people expected Nongshim to become good enough to attract global recognition and be talked about as a title contender. What do you think were the reasons behind the team's dramatic rise in form?

A. The players had a very strong desire to put up better results. Our two new signings, Gori and coach Comet, also exerted a lot of influence, I think. Their input was refreshing and reinvigorated the team.


Q. I know it's been a while, but could you shed some light on why you chose to join Nongshim this year?

A. I can share what was probably the biggest factor, the best part. They hadn't been a top team before, so there wouldn't be too much pressure to put up good results. I'd always put up good results wherever I went, so the fact that I wouldn't feel too pressured by that here played into my choice.


Q. When your signing was announced, there were some rumors about how you chose Nongshim over other potentially appealing teams because they gave you supplies for your cats when you met for negotiations.

A. Well, that... that really was just some silly talk, just a joke. I don't have that much time left as a pro and each opportunity is precious. Of course, cats are great, but I mean, they're with my parents. I love them too of course, but it really was just a fun tidbit and never an actual factor in negotiations.


Q. Will you send Nongshim to Worlds?

A. If all five of us are of the same mind, I think we could definitely make it.


Q. You said you didn't have much time left as a pro. Despite still performing so well you're starting to think about retirement?

A. Well, I'm still just 24, but the older players I used to play with are mostly gone now. Maybe that's why I keep thinking about retirement and hope to keep doing well so I can play for longer. Before, I'd brush off such thoughts since retirement seemed so far away, but these days, I'm thinking about it more since I'll have to face it too, one day.