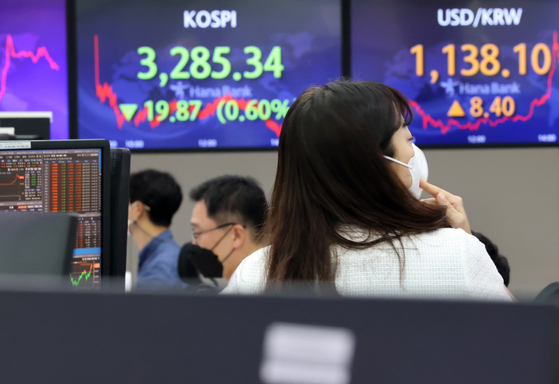 A screen in Hana Bank's trading room in central Seoul shows the Kospi closing at 3,285.34 points on Wednesday, down 19.87 points, or 0.6 percent, from the previous trading day. [YONHAP]


Stocks closed lower Wednesday after hitting an all-time high the previous session amid growing concerns over a surge in new Covid-19 cases. The won sharply fell against the dollar on risk-averse sentiment.

The main index got off to a weak start, weighed down by a spike in new virus cases despite expectations of robust corporate earnings in the April-June period.

Authorities decided to extend social distancing rules in the greater Seoul area for another week and warned of enforcing stronger virus curbs unless the current situation is brought under control.

Worries over the spread of the virus and its variants drove up bio stocks on the secondary bourse.

The local currency closed at 1,138.1 won against the dollar, up 8.4 won from the previous session's close.