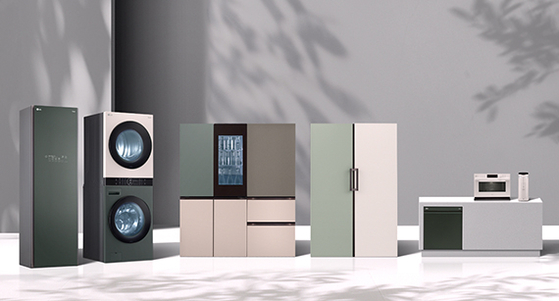 
LG Electronics predicted a 65.5 percent surge in operating profit for the second quarter as strong sales of consumer electronics -- minus its money-losing phone business -- bolstered earnings.

The electronics manufacturer expects 1.11 trillion won ($976 billion) in operating profit, the largest for a second quarter in 12 years.

Sales are estimated at 17.1 trillion won, up 48.4 percent from a year earlier.

Despite the sales projection being the largest ever for any second quarter, it came slightly below the market consensus of 17.3 trillion won.

Following LG’s decision to exit the phone business earlier this year, that division’s losses won’t be reflected in earnings starting in the second quarter. The phone business incurred accumulated losses of 5 trillion won.

LG’s mainstay home appliance business led the good performance on the back of increased demand for seasonal appliances such as air conditioners.

Analysts earlier predicted LG's home appliance and air solution unit would log an operating profit of around 700 billion won.
"Demand for its premium home appliances remains solid," said Noh Kyung-tak, an analyst at Eugene Investment Securities. "As the proportion of premium appliances gets higher, it will feel less pressure from raw material costs."

LG's home entertainment unit, which manages its TV business, was also predicted to report solid earnings with a rise in OLED TV sales. Analysts forecast the unit will report an operating profit of around 300 billion won.

"The sharp rise of LCD prices could be a negative factor for the home entertainment business," said Cha Yu-mi, an analyst at Mirae Asset Securities.
"But that narrows the price gap between OLED panel prices, meaning it could increase the market penetration of OLED TVs."

Analysts believe LG's vehicle component solutions unit remained in the red for the second quarter with its operating loss widening as automakers suffered production disruptions due to semiconductor shortages.

Analysts projected a rosy outlook for LG in the second half of the year even if demand boosted by the stay-at-home economy sags a bit.

"With its efforts to beef up its market share in Europe and its position in the premium products, LG is likely to maintain its growth momentum," said Kim Ji-san, a researcher at Kiwoom Securities.

"While LCD panel prices are likely to be stabilized in the second half, production issues from the auto parts industry are also expected to improve and could make a turnaround in the third quarter."