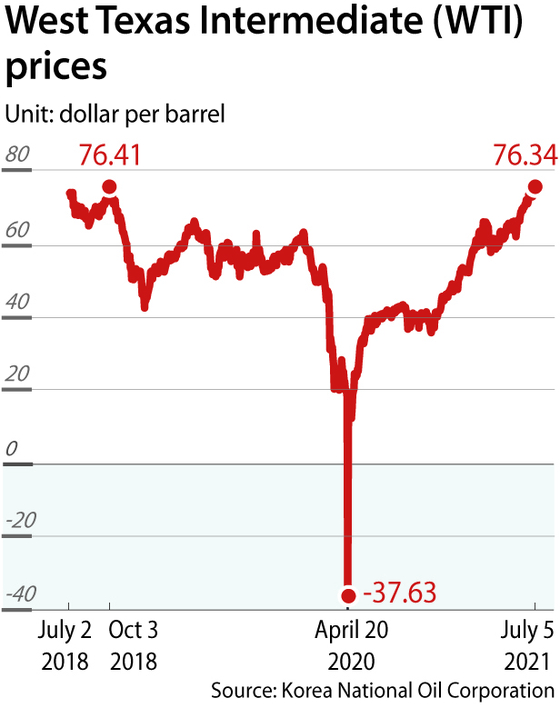 Oil prices have reached a two-and-a-half-year high, weighing on a wide range of businesses.

They are trying to find substitutes for high-priced crude oil, and those that can't are suffering.

The Organization of the Petroleum Exporting Countries Plus (OPEC+) canceled an oil policy meeting originally scheduled for Monday after failing to reach a consensus on oil output among its member states. OPEC+ suggested increasing oil output gradually – 400,000 barrels per day – and delay the expiration of supply cuts from April 2022 to December 2022. The proposal was rejected by the United Arab Emirates (UAE), which wanted to lift its baseline and disagreed about extending the output cut.

As OPEC+ needs to reach a consensus to implement policies, an oil production increase will be difficult for the time being.

Crude oil price started jumping after the meeting cancellation. West Texas Intermediate (WTI) traded at $76.34 per barrel on New York Mercantile Exchange on Tuesday, up 1.57 percent from the previous trading day and the highest trading price since October 2018. Brent crude rose 0.19 percent to $77.31 a barrel.

Although prices slightly edged down after, many expect prices to continue to rise.

CNBC quoted analysts such as IHS Markit vice chairman Daniel Yergin and John Kilduff of Again Capital saying oil prices could break the $80 per barrel mark during this summer. Francisco Blanch, global commodities and derivatives strategist at Bank of America, expects prices to reach $100 per barrel in 2022 or 2023.

That would make things complicated for petrochemical companies.

Naphtha, derived from crude oil, is a key material for plastics and rubber. For manufactures of these products, high oil prices squeeze profits. There are also signs that the global competition to source raw material will intensify in the near future. U.S. petrochemical firms in Texas that halted operations in winter due to the unusually cold weather are recovering operation rates. In China, some ethylene and propylene factories are nearing completion.

“If oil prices go above $70 per barrel, buying high-priced raw materials will be a big financial burden,” said Hwang Yoo-sik, an analyst at NH Investment & Securities.

In response, petrochemical companies are on a search for naphtha substitutes. On Monday, Lotte Chemical announced a 140 billion won ($123 million) investment to upgrade its ethylene plants in Yeosu, South Jeolla and Daesan, South Chungcheong. At the moment, 20 percent of its ethylene output is made using liquefied petroleum gas (LPG). The modification will allow the company to increase the portion of LPG usage to 40 percent by 2022.

“Cutting naphtha usage in producing ethylene while increasing LPG usage will cut costs during sudden rise of oil prices,” said a spokesperson for Lotte Chemical. “It will also reduce air pollutants such as carbon dioxide."

But unlike petrochemical companies, the aviation companies have no alternative. Jet fuel takes up the biggest portion of operating costs for an airline.

According to International Air Transport Association (IATA), jet fuel prices were $79.6 per barrel as of July 25, up 90.3 percent on year. If international flights resume to pre-pandemic levels, Korean Air Lines would have to pay an additional $30 million when oil prices increase by $1 per barrel.

For oil refiners, the price hike has both merits and demerits, according to how long the price hike continues. In the short-term, inventory value rise. Refineries take two to three weeks to refine oil, and inventory gains are reaped when they sell end-products at a higher price due to crude oil price hikes. In first-quarter earnings, SK Innovation reported an inventory gain of 380 billion won and S-Oil 285 billion won.

“We could look forward to inventory gains as international oil prices are surging, but it will be hard to improve sales in the mid- to long-term if gross refining margin doesn’t go up,” said a spokesperson for a local oil refinery. “It’s important that demand for petrochemical products rise. That will pull up the refining margin as well.”