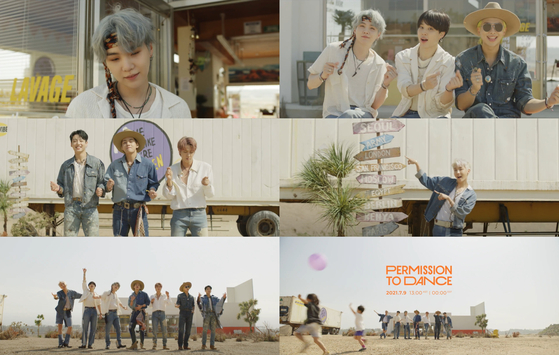 Scenes from BTS's ″Permission to Dance″ music video teaser, which was released Wednesday. The full version is set to drop on July 9. [BIG HIT MUSIC]


A marketing video for "Permission to Dance," a soon-to-be released BTS song, was posted online on Wednesday.

The short spot hypes the Ed Sheeran collaboration with a Route 66 vibe.

Just 30 second long, it was posted on a number of BTS social media channels.

The video begins with a close-up of BTS member Suga reading a magazine at a laundromat in a desert town in the middle of nowhere, perhaps the American Southwest. He then walks out to where the other six are waiting, and they do a few moves to an upbeat tune dressed as cowboys, chill and upbeat throughout.

"Permission to Dance" will be included in a CD version of "Butter" set to release at 1 p.m. on July 9. The music video will be released on the same day and at same time.