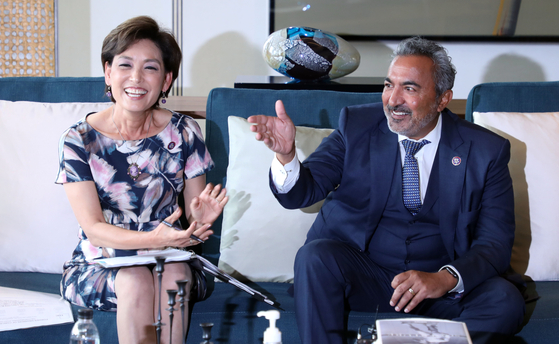 Reps. Young Kim, left, and Ami Bera, hold a press conference in a hotel in central Seoul Wednesday, during a six-day visit by an eight-member bipartisan delegation of the Congressional Study Group on Korea. [YONHAP]


U.S. Rep. Young Kim said Wednesday the United States is ready to provide humanitarian support, such as coronavirus vaccines, to North Korea, but would like to see a “small sign" of change first.

“If they ask for support from the United States, they need to show small steps to make us believe that they are sincere,” Kim, a Republican from California, told reporters in Seoul.

“That one small step could be, just let us include the Korean-Americans in the reunification process, for example,” referring to families separated during the 1950-53 Korean War.

Rep. Ami Bera, a Democrat from California and chair of the U.S. House Subcommittee on Asia, the Pacific and Nonproliferation, and Kim were on a U.S. congressional delegation’s study tour to Korea. They held a press conference at the Four Seasons Hotel in central Seoul to discuss issues including Pyongyang, the state of the bilateral alliance and Sino-U.S. relations.

Kim and Bera serve as co-chairs of the Congressional Korean Studies Group (CSGK) founded in 2018. An eight-member delegation will meet lawmakers, the Seoul mayor, companies and officials from Foreign Ministry and Defense Ministry during their six-day visit to Korea, which kicked off Monday.

Kim and other U.S. lawmakers introduced in February a bipartisan bill calling to appoint a U.S. special envoy on North Korea human rights issues to prioritize helping Korean-Americans reunite with their relatives in North Korea. Korean-Americans have not been included in 21 face-to-face inter-Korean family reunions arranged since 2000.

“There are about 100,000 Korean American that have never been a part of the reunification,” Bera continued, adding that the “prospect of passage is really good” for the House bill, which has over 100 co-sponsors.

She went onto urge the Joe Biden administration to appoint a new U.S. special rights envoy on North Korean human rights issues, a position created in 2004. The Donald Trump administration did not appoint a replacement after the retirement of special envoy Robert King. The post has been vacant since January 2017.

“Without any delay, please nominate and appoint the special envoy on North Korea human rights to fill that gap since 2017,” said Kim. “That position should also be able to help facilitate family reunions and allow Korean Americans to be included in the next round of reunifications.”

She added that she is “somewhat disappointed” that a new human rights envoy has yet to be named despite U.S. Secretary of State Antony Blinken's positive response on the issue in front of the House Foreign Affairs Committee.

Kim said, “It’s got to be a full-time position. It’s got to be someone to move the human rights issue and bring it to the frontrunner not the back burner.”

Referring to failures of past U.S. administrations’ policy on Pyongyang, Kim said, “What we have done is empower North Korea to be a nuclear state. We need to take lessons from it. If we really want to work with North Korea, and if North Korea is serious about coming back to the negotiating table, they need to show that they are willing to make some changes, and South Korea has to work closely with the United States in that regard.”

Kim added, “I think the United States will be willing to do what we can, because I, for one, don’t want to see brothers and sister in the North dying from starvation, famine but also from Covid.”

While North Korea officially claims it has no confirmed Covid-19 cases, North Korean leader Kim Jong-un in a Politburo meeting last week chastised senior officials for creating an unspecified "great crisis" endangering the safety of the country in its nationwide coronavirus prevention efforts.

She added, “One thing that is for sure is that North Korea is suffering like the rest of the world is with Covid,” though the “extent” is unknown.

Bera said on the Covid-19 situation in the North, “I would imagine that it’s not great,” adding that vaccine diplomacy “might present an opportunity to open the door a little bit into conversation.”

The Biden administration, he said, is “open to resume dialogue, but the North has to take the first step.”

Bera further pointed to a “real opportunity” for vaccine cooperation between South Korea and the United States, especially to help out Southeast Asia, noting the recent partnership between Moderna and Samsung Biologics.

“I think there is a real opportunity of Korean companies and the Korean pharmaceutical manufacturing sector to work with U.S. companies and U.S. technology, not just to vaccinate the domestic population here in Korea but also then to use vaccine diplomacy to go into Southeast Asia and other parts of this region to help end this pandemic.”

He weighed in on the impact of the Sino-U.S. rivalry on Seoul and said, “We're not asking the countries in the region, including Korea, to choose one or the other, but we are asking you what are the values of this competition,” adding, “we've seen some of the Chinese business practices.”

Recognizing that South Korea has more bilateral trade with China than with the United States, Bera said, “It's not a choice of either China or the United States, but I think it can be a choice on what are the values that the United States are putting to the table.” This includes protecting the value of democracy, maritime security, freedom of navigation, intellectual property and fair competition on rules-based order.

Both lawmakers urged three-way cooperation among Seoul, Tokyo and Washington, especially to tackle North Korean issues, but also acknowledged the longstanding diplomatic tension between South Korea and Japan over history issues such as wartime sexual slavery.

Bera recognized that the “historic challenges between Korea and Japan will take a long time to resolve” but said it important to try to separate matters of “geopolitical strategic importance.”

Kim said that the “trilateral relationship is really important in bringing North Korea back to the table to negotiate with us,” adding that Pyongyang also has to show its “willingness and desire that they want to get ahead.”

Bera said that despite a history of increased provocations with the onset of a new U.S. administration, such as nuclear and ICBM tests, “They've been relatively muted for the North. Hopefully that's a positive sign that allows dialogue to take place."

Kim noted North Korea’s recent angry responses to joint military exercises between Seoul and Washington, stressing they are not meant to provoke Pyongyang, and called on South Korea “not to react and respond to please North Korea.”

“The first step in making progress on the Korean Peninsula, between our relationship with South Korea, North Korea and the United States, is to bring North Korea back to the table” said Kim. “And there is a saying, 'If you can manage your friend, even if you want to punch that person, you can’t punch him unless that person is in front of you.' So if you're upset about anything, come on, let's have it out in person.”