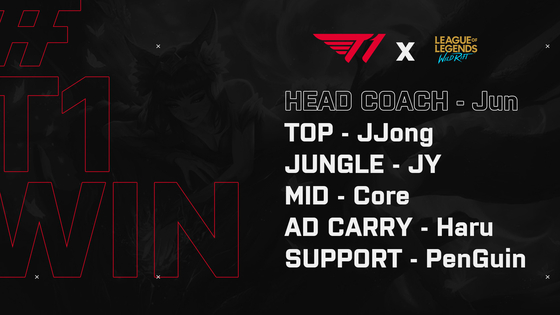 
Multinational esports organization T1 announced the creation of its League of Legends: Wild Rift team this Tuesday via social media. This makes T1 the second League of Legends Champions Korea (LCK) franchise to do so, after rival club KT Rolster's announcement on June 9th.

Wild Rift, the mobile adaptation of League of Legends, was launched last October in Korea. This May, Riot Games revealed that the game's first global tournament will be held in the fourth quarter this year. Detailed plans for the domestic circuit are also expected to be shared soon.

JY, Core, Haru, PenGuin, and Jun all have previous professional experience in Honor of Kings, another mobile multiplayer online battle arena (MOBA) title which was published in Korea as Penta Storm, and internationally as Arena of Valor.

The duo of JY and Core have the most distinguished careers, having been integral to the KING-ZONE DragonX squad that won the 2018 Korea King Pro League (KRKPL).

Haru qualified for the Arena of Valor World Cup in 2019 with NewB, then also played for KZ for six months. PenGuin played for ROX Phoenix for a year, qualifying for several international tournaments including the Honor of Kings World Champion Cup 2019. JJong is understood to be the only rookie on the team, simply having placed second in a Wild Rift community tournament prior to joining T1.

Head coach Kim "Jun" Yeong-jun was previously an amateur Heroes of the Storm player who played in some tournaments as "KeeMyong" after the game's pro scene collapsed. He then transitioned to Honor of Kings, cutting his teeth through stints on KZ and GC Busan Camellia.

How popular Wild Rift esports will be in Korea is unclear. Rumors of more LCK franchises joining the fray abound, but so far, both KT Rolster and T1's announcements have attracted more attention from abroad than from domestic gamers.

Whether Korea will be able to enjoy a period of international pre-eminence in competitive Wild Rift, as it previously has in many premier esports including StarCraft II, League of Legends and Overwatch, is also up in the air. The nation's advanced infrastructure and culture surrounding PC gaming, which facilitated its early dominance in the aforementioned scenes, is unlikely to be as relevant in mobile esports.

Some foreign insiders have questioned why T1, which has recently enjoyed increased presence in the Southeast Asian market through the success of its Dota 2 squad, chose to launch a Wild Rift team in Korea and not in another region where the game enjoys much greater popularity. This may be answered once Korea's Wild Rift esports roadmap is announced.